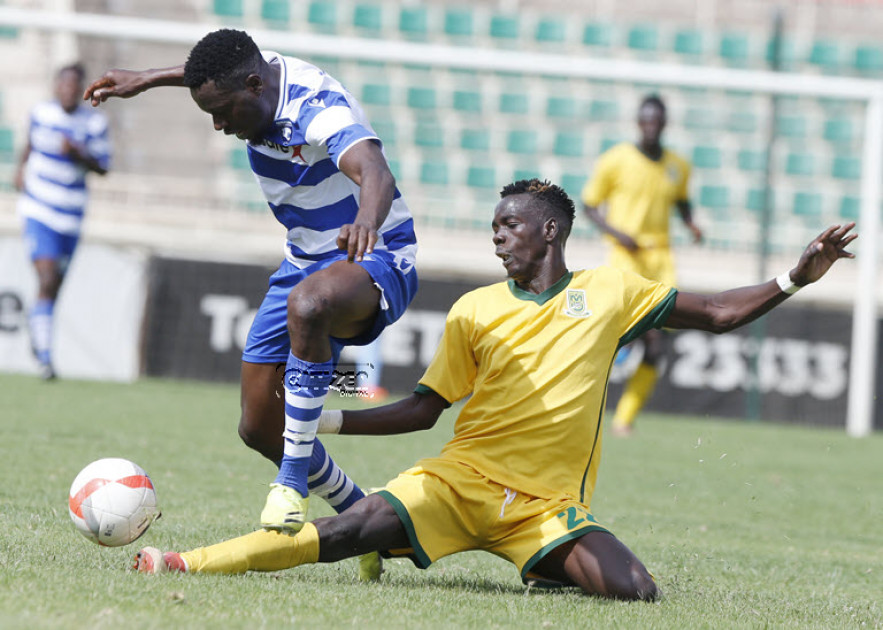 AFC Leopards were held in a 1-1 draw by Bidco United during Sunday’s FKF Premier League clash at the Nyayo National Stadium.

Leopards were the first to score in the 12th minute through Robert Mudenyo before the visitors levelled matters through John Nairuka in the 25th minute.

Mudenyo went for a brave dive to attack Eugene Mukangula’s corner kick and he connected well to send it into the back of the net for the opener.

It sparked wild celebrations on the blue and white corners of the stadium but they were silenced some 13 minutes later when Nairuka struck.

The goal in the 25th minute can be blamed for the lack of concentration in the Leopards defence much to the disappointment of head coach Patrick Aussems.

There was a scare on the stroke of half time as Ingwe captain Marvin Nabwire and Lampert Otieno of Bidco were involved in a nasty collision, forcing the former to be stretched off the field for further medication.

But Nabwire just as Otieno managed to return for the second half an indication that they had not been badly hurt.

The Bidco goalkeeper Edwin Omwabani did well to send Maxwell Otieno’s effort over the bar with a fingertip save as Leopards sought the winner.

And Fasanmi Ojo should have put Leopards ahead but his effort from the header went wide.

Peter Anyona had a clear chance to put Bidco ahead but his shot from the right rolled inches wide in the 66th minute.

At the Sudi Stadium in Bungoma, Nzoia Sugar held the league leaders Kakamega Homeboyz in a 1-1 with Sylvester Owino and Levis Okello trading the goals.

The contest offered little in the opening stages as each side missed open chances until the 36th minute when Homeboyz prodigy Owino rolled home the opener.

Okello responded to secure a point for the relegation-threatened Nzoia.

Nzoia tactician Salim Babu was elated with the draw more-so after his boys utilized the second-half chance.

Babu thanked his striking force for a spirited fight in the second half, hopeful that his charges would give out a similar battling performance against Nairobi City Stars next week.

“My boys played well, we fought hard, and I am hoping we shall replicate the same against Nairobi City Stars,” Babu said.