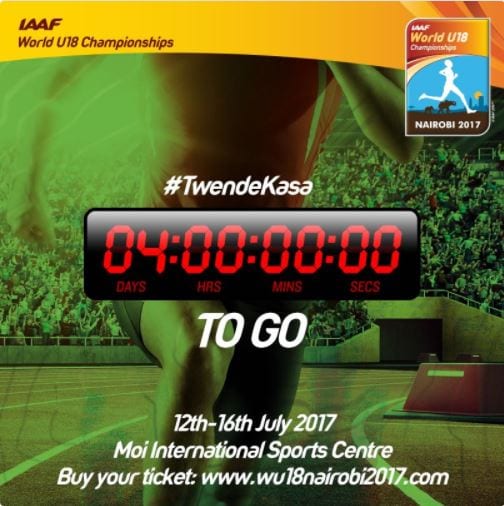 Athletics enthusiasts are urging the Local Organising Committee (LOC) of the IAAF World Under-18 Championship to pull down a controversial billboard advertising the competition set to kick-off on Wednesday.

The billboard has a monkey and an African woman going over the pole vault. this has not augured well with the locals asking for an explanation from the LOC and why the ‘mistake’ was not corrected.
Worse still, the billboard is not factual on the WU-18 best performance which was set by a Swedish athlete Lisa Gunnarson.
Gunnarson holds a personal best of 4.50m  in the outdoors and 4.55m in the indoors, in the under-18 bracket.
The 18 year old Gunnarson also holds an European Youth Olympic Festival silver medal held in 2015.
Many feared that the message being communicated has a racism tag attached to it and would be a bad image to the over 130 countries expected to grace the five day championships.

“That advert is in bad taste. We never compete with monkeys .I’m really shocked an African could not predict the implications of such an advert.

“We are all monkeys that is what the visitors will read into,” said the National Youth Chairman, Barnaba Korir.

Most local sports journalists had a problem explaining to their colleagues including the reporter of this account on the meaning of the advert, considering historical linkage of Africans and the apes.

“I don’t understand that advert, like most here. How will I explain to, say, my son if he quips on the logic of pairing one of the most beautiful pole-vaulters against a dreaded animal whose best place is when we, Africans, are being humiliated,” Muigai Kiunguru, a member of the fourth estate queried.

The billboards can be seen from the Jomo Kenyatta International Airport all the way to Moi International Sports Centre, Kasarani.