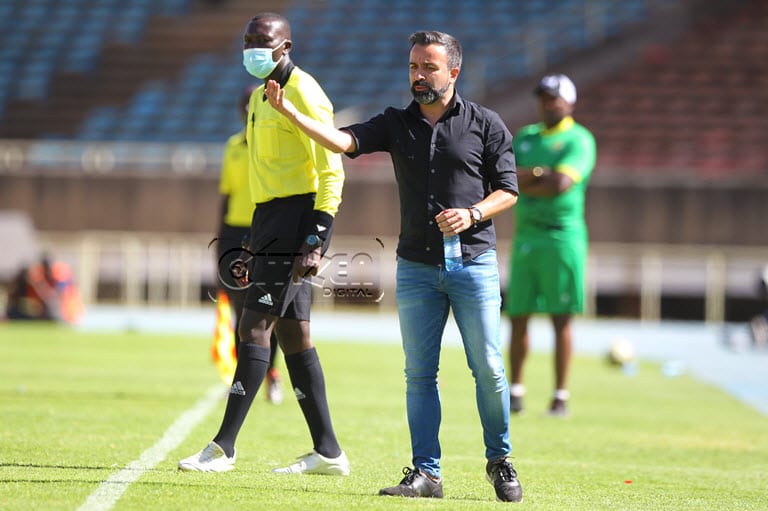 Gor Mahia have suffered a severe blow in their quest for the FKF-Premier League title after head coach Vaz Pinto resigned last night.

In an interview with Citizen Digital from Paris enroute to Portugal, the Portuguese cited personal reasons and the ‘difficult times’ at the club as the reasons that have informed his move though unconfirmed reports indicate he could have been tapped by CD National, a second-tier club in his motherland.

He said: “When I was faced with the challenge of managing Gor Mahia FC, a club of such magnitude and importance, I did not hesitate to come to Kenya.

Six months have passed, with hard work and uncertainty, due to the pandemic and all the difficulties brought along by such circumstances.

With the commitment of all players, we were driven to win with confidence and hard work despite all the concerns. All this resulted in the conquest of the FKF Betway Cup, and we wished we had won more times.

We made a great match on Zambia and we surely deserved more wins in the African competitions. Because we won the FKF Cup, we gained the right to be there again, next year.

Now, due to personal reasons, which President Ambrose Rachier respected for a long time, it is time to end my connection to Gor Mahia FC.

When I arrived, six months ago, the team was in a difficult situation. Presently, we are all aware that we have made a great job, consistent to the dimension of this enormous club. I will take with me your kindness and I promise to come back to Kenya, where I felt so welcome during all these months.

I would like to leave a final message to the Gor Mahia FC fans: keep supporting this club, so that they can go on winning titles and claim the greatest sport symbol of the country! From the bottom of my heart, thank you!”

Pinto joined Gor at the beginning of this term and guided the club to an FKF Cup title last week, beating AFC Leopards in the post-match penalties after a barren draw in regular time to ensure KÓgalo will feature in the continental football for the seventh season in a row.

Besides the cup title he leaves having guided Gor to position four on the 18-team FKF-PL table having accumulated 39 points from 23 games, sitting behind table leaders Tusker(50), KCB(46) and AFC Leopards on 43.

KÓgalo have gone through a tough financial phase operating on a shoe-string budget, the playing unit and technical bench owed salary arrears.

His exit will further jolt the club that had hoped to build on the cup success to challenge for the gong.

Assistant coach Sammy ‘Pamzo’ Omollo is likely to step in and guide the outfit through the remainder of the season.