Boks to up the tempo against Namibia in African Derby 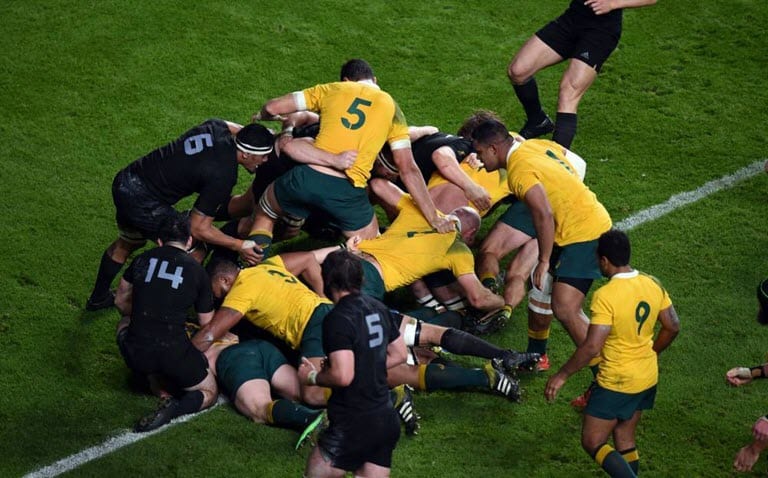 A new-look South Africa plan to adjust their strategy to a high-tempo, running game for the Rugby World Cup Pool B clash against minnow neighbours Namibia at the City of Toyota Stadium on Saturday.

The Springboks have made 13 changes to their starting side for the encounter, which includes moving mobile hooker Schalk Brits to the back of the scrum in a loose trio that also includes Sevens veteran Kwagga Smith and Francois Louw.

That, along with the half-back pairing of fly-half Elton Jantjies and scrum-half Herschel Jantjies, suggests the Boks are going to look to keep the ball in hand and test the solidity of the Namibian defensive line with eager runners.

It is a change of strategy from the forward-based, kicking style employed in the opening 23-13 loss to New Zealand last weekend, but proof that coach Rassie Erasmus can pick horses for courses and is not married to a single game-plan.

“Namibia are a little bit of an unknown factor for us. We studied them a lot in the games leading up to the World Cup, and then the Italy game (which Namibia lost 47-22),” Erasmus told reporters in Nagoya.

“What that (loose trio) gives us is a lot of speed over the park, which is another benefit against a Namibian team which, in our analysis, they just want to play the game and enjoy the game and have a lot of fun.

“So, I think we will need some speed all over the park and this loose trio will give us that.”

It does mean the Boks may be less effective in the line-out without the likes of Pieter-Steph du Toit and Duane Vermeulen, but Erasmus believes they will have enough options.

“We don’t feel necessarily that we will need so many lineout options in this game. A guy like Francois Louw will probably be one of our lineout options, and so will Kwagga.

“If we do struggle, we can bring in a guy like (lock) Franco Mostert off the bench.

“We have some tall guys in RG (Snyman) and Lood (de Jager) there, so we will manage that.”

Namibia are under no illusions as to their task in what is the first of two massive fixtures with New Zealand to follow in Tokyo on Oct. 6.

Coach Phil Davies says a key challenge for his side will be to manage the collisions against a physical, fired-up Bok team.

“The collisions are a big area defensively, and then ball carrying and the set-plays. They are a very physical team with a very well-drilled pack of forwards. Technically they are well organised and structured,” Davies said.

“But we have got some ideas ourselves (about how to counter it), so it will be very interesting.”

Namibia have been able to include key wing Lesley Klim after he recovered from a calf problem, while experienced centre and squad captain Johan Deysel starts on the bench.