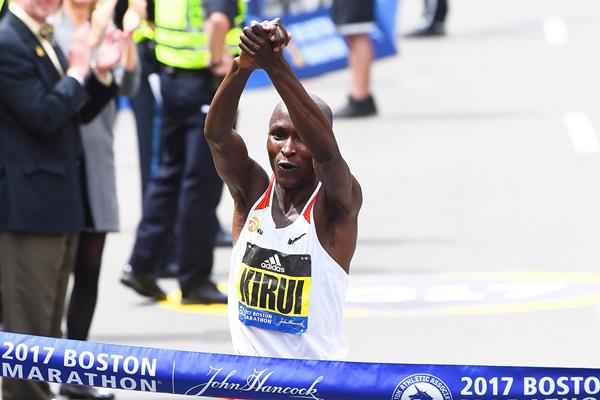 The otherwise unheralded Kirui announced himself on the big stage when he claimed his first marathon major in only his third attempt over the distance, beating a strong men’s field to win in 2:09.37. Rio 2016 marathon bronze medalist Galen Rupp (2:09.58) and Japanese, Sunguru Osako (2:10.28) settled for second and third places.

Together with Kiplagat, a two-time world champion, they each earned 25 points to go top on a day Olympic gold medallist Eliud Kipchoge was named the Series X champion after topping the leader board with 50 points.

Following decisive victories at last years’ Virgin Money London Marathon and the Rio 2016 Olympics marathon which are part of the world most renowned races earned Kipchoge a $500,000 (USD) (KES 51,725,000) prize and a second AbbottWMM Series win.

The organisers will name a Series X women’s champion once the doping investigation, and any potential appeal process, is complete for Olympics gold medalsit Jemima Sumgong, who currently leads the  women’s Series X standings. Sumgong, failed an out of competition dope test where she tested positive for the banned blood booster EPO.

In Boston, Kirui comfortably extended Kenya’s dominance over the distance and becoming first Kenyan to win the title since 2012 when Wesley Korir won it.

“I tried to stay with my colleagues, because at the beging of the race I had good feeling that I would win the race. I had really prepared well for the race. I’m very happy for today’s win and to add my name in the list of Kenyan Boston winners,” the excited Kirui said in his post-race interview.

Men’s race started 17 minutes after the women had gotten off the mark and crossed the first five kilometers in 15:23, as one large group led by race favourite Emmanuel Mutai.

At the 12 km mark, the men had taken 39:08 minutes to cover the distance, with Mutai still at the front with a split of 4:55. Mutai then made a strong surge at the watering point which forced the lead pack to increase the pace at the 15km mark and crossed it in 45:42

American Gallen Rupp surged past Mutai at the 28km mark and controlled the race to 32k as Kirui kept close tabs on him.

The two ran neck to neck at a very fast split of 4:39 at the 35km. Without waiting further for Rupp to make a move, Kirui started opening the gap pushing the pace further from the 35km to 40 km split Kirui ran the 5km split in 14:34 giving him a lead of 20 seconds ahead of Rupp.

Rupp tried to close in at the home stretch but Kirui had some gas left in his lungs to take the men’s title comfortably with a 16 seconds lead.

Kiplagat, a mother of two, could not hide her joy in her post race interview with her children tucked closely by her side.

“I feel so great I really wanted to win the race. When I was running my body was still feeling okay and when we got to the 30 km mark I decided to increase the pace to see if I would still be okay.

“I was also checking to see if my fellow athletes would also pick and when they did not I decided to open up the gap.” Said Kiplagat as she thanked her children for giving her ample time to train and win.

The women crossed the first five kilometers in 17:45 with Desi leading, Ethiopian Atsede Baysa on her right as Kiplagat and Diane Nukuri ran behind them.

At 10 Km  Brigid Kosegei had taken the lead crossing the marker at 17:12 ahead of Linden, Joyce Chepkirui, Cherono and Kiplagat; as Caroline Rotich and Valentine Kipketer stayed tacked in at the back of the pack.

Then Desi took lead again at the 19.3 km mark with a split of 5:17 as the Kenyans and Ethiopians stayed behind as she performed paced made for them.

Kiplagat took the lead half way as she crossed it in 1:12.24. Desi and her compatriot Hasay started falling off the pack as Kipketer making it a six lead pack. She was still leading as the 28km which they crossed in a split of 5:29.

Kiplagat tore the race apart by the 30 km mark by opening a huge gap between her and Chelimo as Hasay tried to keep up with the two.  By this time Desi had completely faded off from the lead pack.

Kiplagat hit 35k in 2:00:01 with a 5:09 split keeping a healthy lead and was not even slowed down by the special drink confusion at a watering point.

At the 37 it was clear that Kiplagat was running away with the women’s title with a healthy lead of over 200m gap with Chelimo hardly visible at the back.