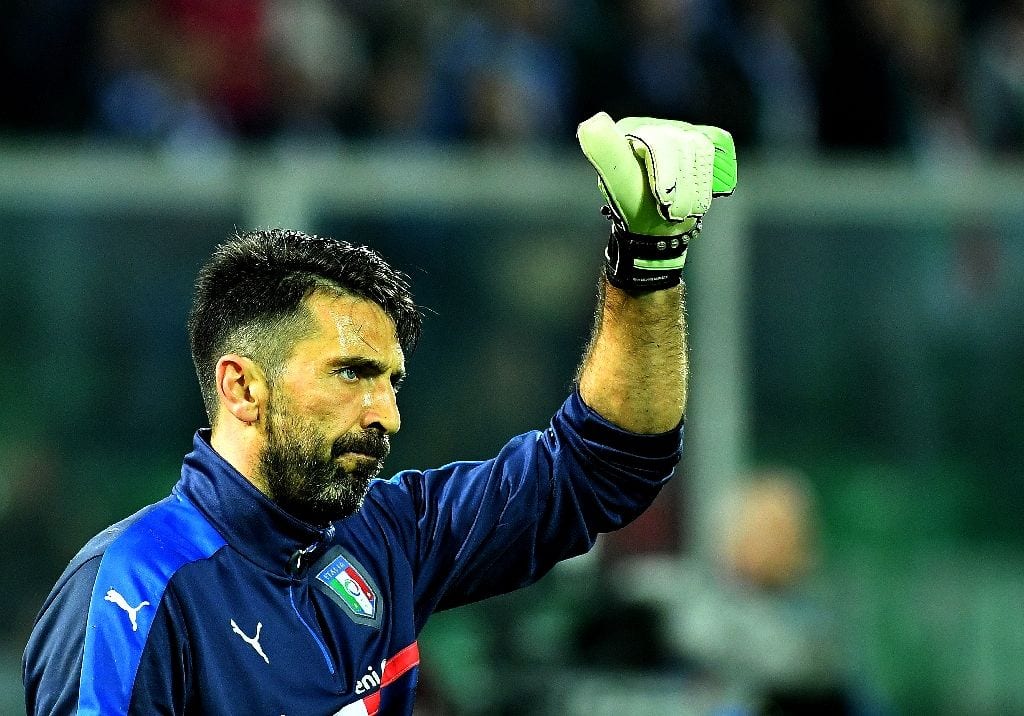 Italy kept pace with Spain in European World Cup qualifying as goalkeeper Gianluigi Buffon played his 1,000th professional match in a 2-0 victory over Albania on Friday.

A first-half Daniele De Rossi penalty and late second from Ciro Immobile was enough to earn the Azzurri three points but they remain behind Spain on goal difference at the top of Group G after La Rioja downed Israel 4-1.

Manchester City forward David Silva and Chelsea’s Diego Costa were on the scoresheet alongside Vitolo and Isco, while Lior Refaelov netted Israel’s consolation.

In Palermo it was a day for Buffon to savour as he won a European record 168th cap and helped Italy extend their unbeaten run in qualifiers to 55 matches (41 wins, 14 draws).

De Rossi converted the spot-kick on 12 minutes after Migjen Basha, one of six Albanians plying his club trade in Italy, brought down Andrea Belotti.

Albanian fans threw flares onto the pitch in disgust and when they did so again just before the hour mark, the game was suspended for five minutes.

Immobile made the game safe 10 minutes from time by heading home a Davide Zappacosta cross.

“At the start, there was too much tension, we tried to do too much and missed some fluidity,” said Italy coach Giampiero Ventura. “But we were never in danger.”

Spain had their game wrapped up by half-time in Gijon as Silva drove home a pass from Jordi Alba before Vitolo’s shot in first half injury time squirmed under Israel goalkeeper Ofir Marciano.

Refaelov gave the visitors something to cheer with a left-foot effort on 76 minutes, just moments after Rami Gershon had struck the post with a header.

But Iago Aspas teed up Isco to put the gloss on a comfortable win two minutes from time.

Defeat saw Israel slip four points behind the two Group G heavyweights with five games left to play and only the pool winners guaranteed a place at Russia 2018.

“I am very happy with my goal, but the victory is the most important thing,” said Silva. “We needed to win to stay ahead of the rest.”

In the other group game, Macedonia got their first points of the qualifying campaign with a 3-0 win at Liechtenstein, who remain pointless.

Captain Seamus Coleman suffered a broken leg as the Republic of Ireland and Wales drew 0-0 in Dublin in Group D.

Neil Taylor was shown a straight red card for the scything challenge that left Irish defender Coleman clutching his shattered lower leg and screaming in pain as Shane Long tried to comfort him.

It was a costly game for Wales who saw their captain Gareth Bale booked for a high boot on John O’Shea meaning he, like Taylor, will miss the next qualifier away to Serbia in June.

Serbia moved top of the group after coming from behind to win 3-1 in Georgia.

Nika Kacharava gave the hosts a fifth minute lead but Dusan Tadic equalised from the penalty spot on the stroke of half-time.

Serbia now lead the Republic on goal difference with Wales and Austria, 2-0 winners over Moldova, four points behind.

Croatia went three points clear at the top of Group I with a 1-0 victory over Ukraine courtesy of Nikola Kalinic’s goal seven minutes from half-time.

Iceland moved up to second with a 2-1 win at Kosovo, whose wait for a first competitive victory goes on.

Bjorn Sigurdarson gave the visitors a 25th minute lead before Gylfi Sigurdsson doubled the advantage from the spot 10 minutes later after Benjamin Kololli had brought down Birkir Saevarsson.

But seven minutes into the second period Atdhe Nuhiu headed home a Herolind Shala corner to give Kosovo a lifeline — although it wasn’t enough.