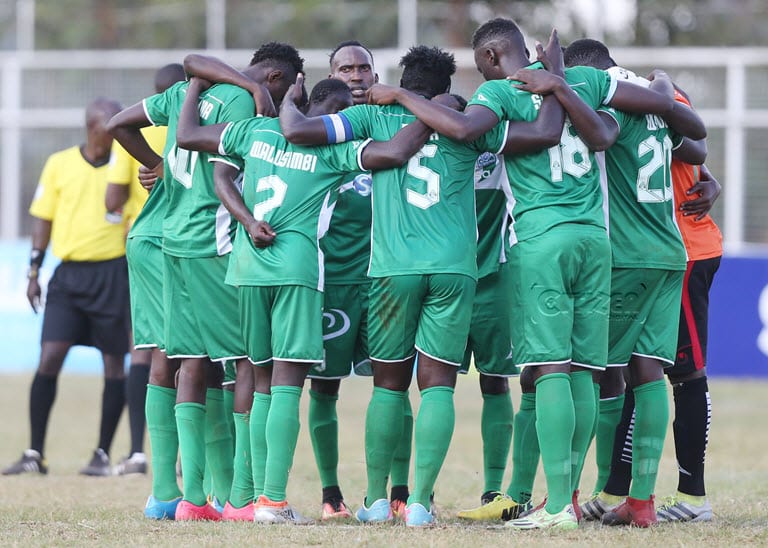 With only nine Kenyan Premier League rounds to go, record 15-time champions Gor Mahia are undeterred in their quest to reclaim the title despite their barren stalemate  on Sunday against Thika United.

K’Ogalo are nine points clear of second placed Sofapaka, who also registered a goalless draw against debutants Kariobangi Sharks in the weekend action.

Head coach Dylan Kerr, who is yet to taste defeat in the league since taking over the mantle from Brazilian Jose Marcelo ‘Ze Maria’ Ferreira, says the barren draw against the struggling milkmen should charge his team to press harder in the remaining matches.

“That (match against Thika) is gone, everyone expected us to win but this is a league race and any team competing has its rightful place here,” he said, adding: “My players must be reminded now that it is not over until it’s over, and our target is to win the title.

“Going forward they (players) must press harder,” the Briton said.

But perhaps the jigsaw for the fluid K’Ogalo machine is the fierce competition growing within the squad, with goalkeeper Fredrick Odhiambo winning Kerr’s confidence gradually at the expense of  experienced hands of Oluoch.

Francis Kahata and Timothy Otieno have been inspiring whenever called into action, as well as budding winger and former Nzoia Sugar winger Boniface Omondi.

Thus, Kerr is confident of the quality he has in the team as the league nears the homestretch. “I’m happy with the mentality of my players, that fighting spirit in everyone. If a regular player is missing you don’t see a big gap.

“The standards are high, being at Gor calls for utmost commitment which I feel is sinking in the entire team,” the Briton added.

Meanwhile as K’Ogalo continues with their unprecedented march to the gong, AFC Leopards and Posta Rangers were once again inconsistent, settling for 0-0 draws against Kakamega Homeboyz and Ulinzi Stars respectively.

Ulinzi are fifth with 37 points, two matches in hand could elevate them to second if they reap maximum points. Leopards, on the other hand, reflect the image of struggling giants, dropping a place down to14th after the draw.

Ingwe are now fighting relegation battle. At the end of the campaign, two bottom placed teams will automatically be relegated, while the 16th placed side will fight it out with the third-placed team in the second-tier during playoffs.

With a resurgent Mathare United breathing hot on their necks, Leopards could be in the red zone if they falter in the forthcoming fixtures.

At the extreme end of the spectrum, Muhoroni Youth appear to be sealing their exit route to the National Super League, having garnered only 20 points from 24 matches.