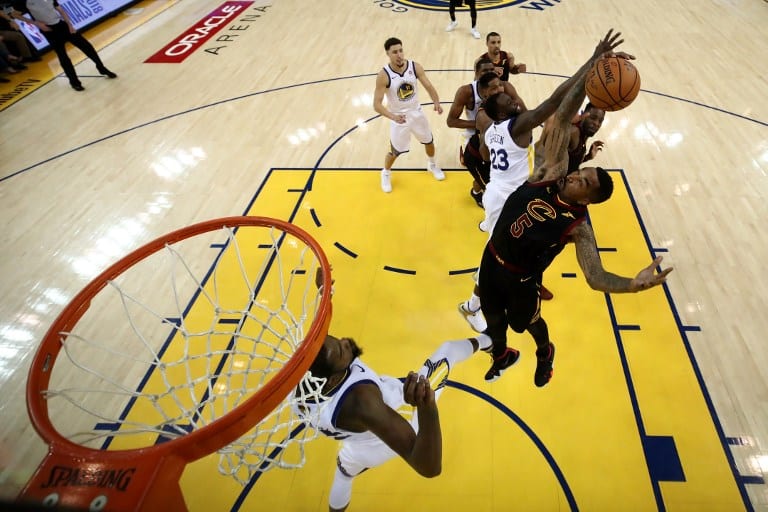 “To do what he did tonight and come out robbed, it’s just not right,” Lue said.

A physical, heated and emotional game marked the start of the fourth finals in a row between the teams and the eighth in a row involving James, who echoed Lue’s theft theme.

“There were some plays that we had taken away from us,” James said. “We’re in the fight now. They got a great taste of it tonight.”

The crucial moment came with 36.4 seconds remaining in the fourth quarter as Durant was whistled for a charging foul that was overturned on video review into a blocking foul on James, giving Durant two free throws he made to lift the Warriors level at 104-104.

“I read that play just as well as I’ve read any play in my career, maybe in my life,” James said. “I seen the play happening. I was outside the charge line. I stepped in, took the contact. It’s a huge play.”

Lue said James was clearly outside the line so the play never should have been reviewed, much less reversed.

“For our team to come out and play their hearts out and compete the way we did, man, I mean, it’s bad,” Lue said.

“It has never been done, ever, in the history of the game. And then tonight in the finals on the biggest stage, when our team played well, played our ass off, man, it ain’t right. It ain’t right.”

Referee Ken Mauer defended the choice to review the call.

“We had doubt as to whether or not James was in the restricted area,” Mauer said. “It was determined he was out of the restricted area but he was not in a legal guarding position prior to Durant’s separate shooting motion. So we had to change it to a blocking foul.”

Golden State coach Steve Kerr said he had seen such a reversal “not often, but I’ve seen it a couple times.”

Durant said he had a block-charge reversal in the regular season.

“I knew once it was 30 seconds to go that they could review that situation,” Durant said. “I knew he was late on the drive and I knew I had my man beat and he came over a little late. So when they called the charge I was surprised, but I’m glad they reviewed it.”

After play resumed, James hit an inside shot and Curry answered with a 3-point play but Cleveland’s George Hill made a free throw to pull the Cavs level at 107-107 with 4.7 seconds remaining in the fourth quarter.

When Hill missed the second free throw, Cleveland’s J.R. Smith grabbed the rebound. But instead of trying for a winning layup, he moved away from Durant at the hoop and the game went into overtime.

“We got lucky,” Kerr said. “He could have taken a shot, but he dribbled out. I guess he thought they were ahead. We got lucky.”

Lue said Smith thought the Cavs were ahead but Smith said he thought the game was tied and was trying for a final shot.

“Kevin was standing right there. I tried to bring it out and get enough space to maybe get a shot off,” Smith said.

“I thought we were going to take a timeout because I got the rebound. I’m pretty sure everybody didn’t think I was going to shoot it over KD.

“If I thought we were ahead, I would have just held on to the ball and let them foul me.”

Durant, who had three blocks, said, “If he had tried to put a layup up, I had a good chance to contest it.”

Golden State opened overtime with a 9-0 run and the Cavs never had a chance. But with the outcome not in doubt, Cleveland’s Tristan Thompson made a flagrant foul on a last-second shot and was taunted by Draymond Green, who had the ball shoved in his face for his trouble as teammates kept them apart.

“It wasn’t really a verbal altercation,” Green said. “Nothing really. It is what it is. Life goes on.”

Curry and James were talking during a break to review the incident.

“It’s going to happen. There’s going to be chatter,” Curry said. “We’ve gotten very familiar with each other over the last four years. At the end of the day it’s a bunch of nothing.”