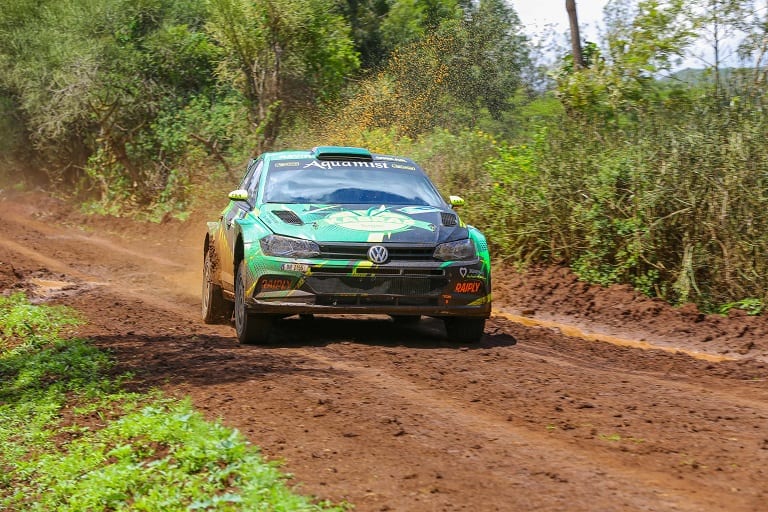 Third overall on the Rallye Sports Club (RSC) organised round saw Chager extend the lead in his quest for a fifth career KNRC title.

All that “The Flying Singh” needs to do, should Tundo claim the remaining two rounds in Eldoret and Guru Nanak, is to finish fourth on both ocassions.

The seventh round of the series culminated at the ASK Showground in Meru in the presence of Governor Kiraitu Murungi but not without drama.

Carl picked up a puncture in the opening stage while Chager went off and lost second position to the former.

“It’s been a very different rally.We did extremely well in every single stage but in the spectator stage we got distracted by a police car which was stuck by the side and lost lots of time.

“In the last stage we lost power steering. I’m still leading the Championship and that’s obviously the main focus. We have two more events to go, so let’s see how it goes,” said Chager.

Tundo on his part said: “We got a puncture in the first section which cost us lots of time and dropped us down to 16th. But then in spectator stage we managed to get through without getting stuck. We hit the same stone that Manvir rolled on and broke the oil pump. We then ended up in second position. We are happy about that. We are still in the Championship hunt with two events to go.”

Winner Onkar remarked: “We starred off very cautiously and didn’t commit too much as we were worried about the conditions on the road. Towards the end we made a massive push to maintain the lead as Boldy and Flash were coming for us. It’s now up to Chager and Flash, whoever wins the Championship. We hope to give them a run for their money next season.”

The top three KNRC positions remained unchanged with Chager clinging onto the summit while Flash Tundo and Manvir stayed in second and third respectively.

Sadly, Manvir’s high-speed roll in his Skoda saw his championship campaign go up in smoke.

It was a bitter pill to swallow for the three times reigning African Champion who was chasing Jaspreet Chatthe”s unpreceded double of winning the ARC and KNRC in 2015.

Manvir was airlifted to Nairobi for further checkup and was adjudged safe by doctors at Aga Khan university Hospital.

“Manvir and I have had a big high speed accident on stage 4, I am okay but Manvir has been taken for check ups,” said Manvir’s navigator Drew Sturrock after the fourth stage incident.

Onkar Rai who took over the lead from teammate Chager going into first Service moved from eighth to fifth spot on the log following emphatic victory on KCB Meru Rally.

This was Onkar’s first finish in his VW Polo R5 super car after two failed attempts in Kilifi and Nanyuki.
Onkar upgraded from Skoda Fabia R5 to VW Polo R5 on KCB Kilifi Rally where his spirited campaigns on both ocassions came a cropper.

After winning the season opener in Nakuru where he sealed an unprecedented hatrick, Onkar has suffured excruciating retirement on Safari, Mombasa and Nanyuki.

Safari was his last event in the Skoda Fabia R5.

Meanwhile, the battle of KNRC categories has intensified after Meru.

Two Wheel Drive leaders Daren Miranda and Wayne Fernandes have now attained an unassailable lead in class but have to race one more round to meet the 80% threshold for Championship success.

“The Two Wheel Drive is now a foregone conclusion, but we will have to participate in one more round to meet the 80% rule,” Fernandes said.

Daren and Wayne also finished second in Division Two to cling onto the third spot on the log.

Sohanjeet and Malik skipped the RSC event due to pressing commitments while Issa and his partner Job Njiru failed to master the demanding home terrain.

Western Kenya Motor Club of Eldoret will host the next round of the series on November 22.