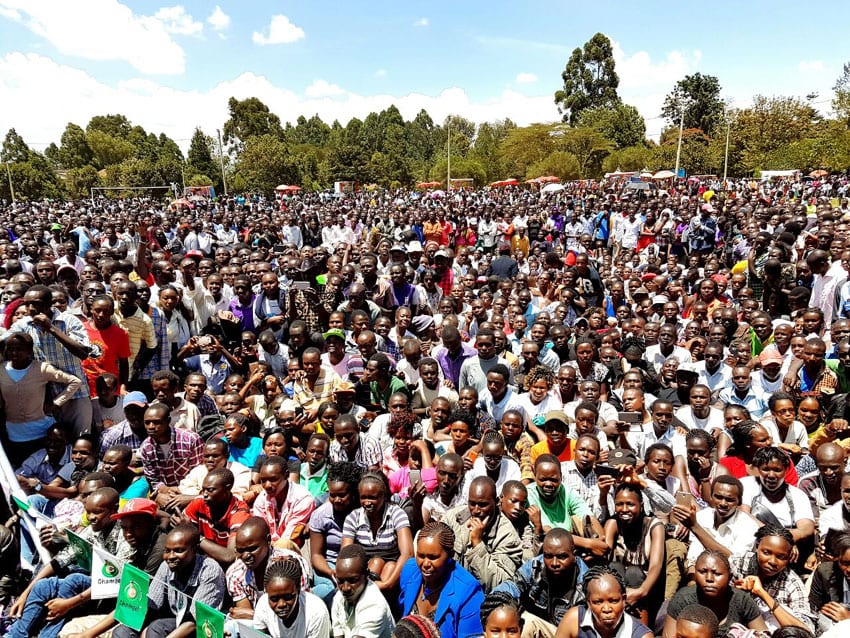 The self-styled Home of Champions erupted into celebration and thanksgiving when the Chamgei FM Extravaganza drew out a constellation of athletics greats and thousands of their adoring fans to the Eldoret National Polytechnic Grounds on Sunday in song, dance and merriment.

Despite the event being deferred by a week, fans of the Royal Media Services-owned station came out in force to toast the resounding achievements of their internationally acclaimed heroes in a year where Kenya topped the African charts at the Rio 2016 Olympics in Brazil.

The main dais was a roll-call of the athletics royalty –past and present- and below them, hardly any blade of grass was visible as revellers filled the grounds from corner to corner in a sea of humanity to enjoy a riveting entertainment programme that left them yearning for more as they interacted with their favourite voices on radio.

As early as 8:00am local time (+3GMT) hundreds of fans had already swarmed around a decorated but yet empty podium impatiently waiting to welcome their cherished stars and meet with their Chamgei FM presenters.

And soon they got their wish as Olympic champions, Eliud Kipchoge (marathon 2016), Faith Chepng’etich Kipyegon (women 1500m 2016) and Brimin Kipruto (steeplechase 2008) as well as World titleholders, Julius Yego (Javelin) and Hyvin Kiyeng (women steeplechase) among a slew of internationally acclaimed athletes took their place in the stage.

Athletics Kenya boss, Lt. Gen (Rtd) Jackson Tuwei led local members of his federation in giving the event an official seal of approval when he arrived to take his place.

One by one, stand-up comedians, dance troupes, local musicians and athletes together with other sports dignitaries trickled into the polytechnic grounds with the arrival of each disrupting the peace as the growing crowds as each struggled to get a clear view.

Slowly, the event organizers brought calm among the excited fans and after brief introductions; all was set for a classical afternoon treat.

Upcoming musicians including the likes of U-18, Arap Rono and Maggy Seurey were ushered onto the podium in turns.

The relatively unknown U-18 would later set the crowd ablaze with his electric dance moves that included an audacious back-flip off the stage as a closing move to his repetoire.

And it was a fitting curtain raiser for the more established music stars including Rute Kapilet hit maker, Kapkoma Lady, Sweet Star, and Lillian Rotich as they all worked the crowd into a frenzy.

Kapkoma Lady delivered a show for the ages and was recalled by the hungry fans for an encore since they could not get enough of her.

And so did youngster, Sweet Star who showed no signs of frailing under the high bar set for him by Kapkoma when he came on next.

In between the two performances, Olympics champion Kipchoge was allowed to have a quick word with the awestruck crowd after requesting to make an early exit from the celebrations.

“I want to take this opportunity to thank Royal Media Services for being the first company to recognize the efforts of our athletes.

“When you see us win it’s not because we did it overnight; we put in a lot of work in training and it takes margins of seconds, minutes, days and years of hard work to achieve the success you see,” the marathon king who has now amassed a winning streak of seven successive marathons said.

“We do not need you to run with us but we want you to respect us. We work very hard but then someone decides to pockets Ksh25m and keeps it to himself while we suffer. That we shall not allow and therefore I urge my fellow athletes and even those who have retired that we must take a common stand in this,” Korir told the charged supporters.

There was a special moment for an Emurua Dikirr resident, who had travelled hundreds of kilometres, armed with a portrait of javelin champion Yego and was quickly noticed by his idol who was also on stage.

The two shared a photo session before the Olympics silver medalist promised to cover for his transport expenses along with purchasing the pencil sketch.

“It’s the small things like this that really touch my heart and make me strive for excellence. For those of you who are on social media, I always see your prayers and I appreciate them a lot.

“We are very pleased with the togetherness showed to us from every one of you and especially Royal Media services; they’ve shown us that we’re not alone,” an emotional Yego said, clutching his latest collection of art.

The YouTube Man added that he would like a meeting scheduled with President Uhuru Kenyatta so that athletes get chance to express their grievances to him in person.

“The Rio issue is still unresolved. We also hope that Royal Media can make this event an annual one and especially at this time of the year when there are no global championships,” he added.

Lillian Rotich was the third big performer lined-up and she gave her fans more than what they asked for, tagging along Heshima hit maker and close friend, Anastacia Mkwabwa for the final musical act of the day.