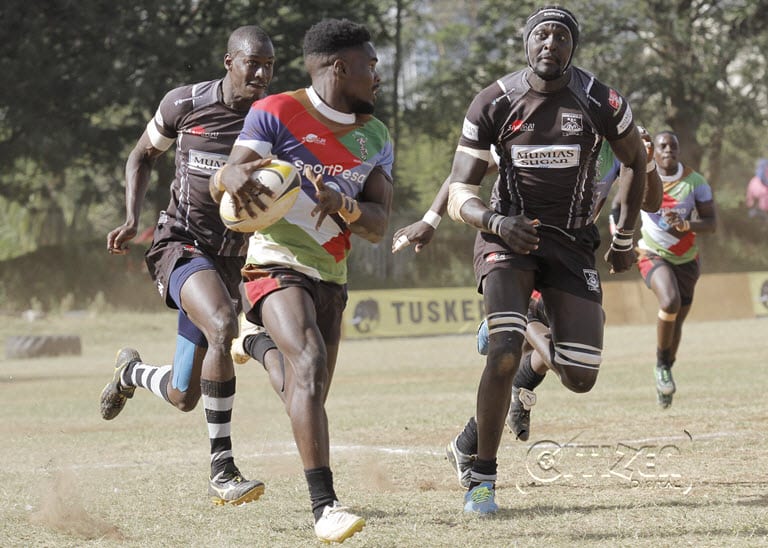 Impala Saracens kept alive their hopes of a play-offs spot by edging out visiting Top Fry Nakuru 43-36 in a close Kenya Cup encounter at the Impala grounds in Nairobi on Saturday.

The hosts crossed the whitewash eight times and scored a penalty compared to Nakuru’s five tries and two conversations.

Full-back Ian Minjire was at his best bagging a double for the Ngong Road-based side while Paul Mutsami, Daniel Ndome, and Vincent Moses were also on target.

At half-time, Nakuru were leading 22-13 but a composed Impala worked on their mistakes and soon after the break, Impala scored a well-crafted try by the legendary Kenya Simba utility back Victor Mose who went under the posts.

An infringement from the Nakuru defence caused the visiting side a penalty which mercurial half-back Nato Simiyu slotted in for the three points.

Nakuru tried to reduce the deficit through key players Geoffrey Ominde and powerful lock Philip Kwame but their efforts were in vain.

Walter Okoth and Charles Odongo got on the score sheet for Nakuru with beautiful tries, with Geoffrey Ominde converting them.

Nakuru tried their luck in the final minutes of the game but Impala managed to hold on,with the game ending at 43-36 in favour of the Frank Ndong coached side.

The win sees Impala move to 34 points, to stay fourth. Kabras, on the other hand, remain at third position after their

47-15 win over Kisii RFC at the Mamboleo showground in Kisumu.Philip Wokorach got 15 points for Kabras, with additional 10 coming from conversions.

In another match, Humphrey Kayange scored a hat-trick as wounded Mwamba RFC beat Nondies 53-12 at the Railways Club in Nairobi to register their second win of the season.The Kulabu have had a disastrous run this season, garnering just a paltry 13 points.

Apart from Khayange, Horace Otieno was also on the score- sheet while Brad Owako and Greg Odhiambo sealed the bonus win for the Nairobi based side.

At the same time, Homeboyz Rugby registered a 27-13 win over visiting Blak Blad at the Jamhuru showground to stay at second position in the 12- team log with the playoffs around the corner.

Most teams will not be in action next weekend, but action resumes on  the weekend of Feb24/25 when KCB will host Kabras Sugar at the Ruaraka grounds, while Mombasa RFC will travel to Nairobi to face Homeboyz.