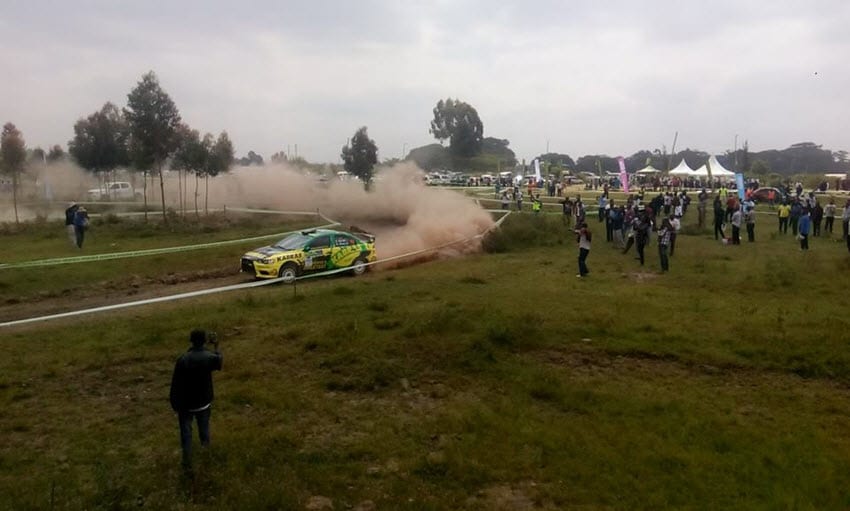 Baldev Chager is the overnight leader of the 64th KCB Safari Rally that zoomed off on Friday morning after winning the 2.2 kilometer Special Spectator Special Stage in Nairobi in a tight race that laid a marker for the main weekend action.

The ‘Flying Sikh’ and two-time national champion lost one minute and 48 seconds with Onkar Rai (1:49) and event champion, Jaspreet Chatthe (1:50) coming in second and third in a Mitsubishi Evolution X sweep of the top three.

Behind them, Carl Tundo who is seeking a fifth Safari crown, Finnish speedster, Tapio Laukannen and Ian Duncan, the only driver who won the event when it was part of the World Rally Championships roster rounded the top six.

“I admit I wasn’t driving at my best but it’s okay because I didn’t damage my car. I’ll try to make sure I make it to the end and best case scenario we actually win the Safari Rally,” Duncan told Citizen Digital.

Issa Amwari who lost 1:52 was the highest placed indigenous driver in ninth in the Kenya National Rally Championship signature showpiece that rumbled off  after the official flag-off by Sports, Arts and Culture Cabinet Secretary, Dr. Hassan Wario at Nairobi’s KICC.

The twin track format was a definite crowd pleaser as the hundreds of fans gathered at the opening stage cheered on their drivers as they raced side by side on the outlined track.

Three-time KNRC Champion, Chager elicited the greatest reaction among the fans with his upgraded R4 Mitsubishi Evolution X roaring ahead of Karan Patel who endured a tough start to the three-day event finishing 12th.

“I was in team Kabras for the day so obviously I got an adrenaline rush watching Baldev roaring past me; trust me it never gets old,” exclaimed Samuel Karanja a die-hard rally fan.

The ‘Flying Finn’ Tapio, the only driver in a non-Mitsubishi car in the top five, was also a favourite with the crowd with majority of the supporters roaring him on as he battled against Mitchell’s Skoda Octavia S2000 on the dusty track.

“My guy Duncan just lost to Jassi so you can obviously tell I’m bummed. I didn’t expect to see this many Mitsubishis in the race and props to Mitchell for doing his thing in his Skoda,” claimed Marvin Ocholla who was attending the event for the third time.

Following the Special Spectator Stage shakedown that thrilled fans who converged at Jamhuri Autocross track, the drivers took to the 130 kilometre transport section to Elementaita Lodge for the overnight stay ahead of Saturday’s action around the area.

The race restarts at Elementaita Lodge at 8am with drivers tackling six stages around Naivasha region.

Earlier, Wario urged Kenya Motor Sport Federation not to relent on its bid to restore the Safari Rally its lost world status.

The Safari which attracted world-famous rally drivers to Kenya was dropped from the World Rally Championship in 2002 when Kenya failed to meet FIA organisational requirements.

Wario said the Government will continue supporting KMSF in its endeavours to ensure the event regains its rightful place in the global series.

The Minister urged KMSF under the newly elected Chairman Phineas Kimathi who is a former local rallying ace to continue pushing for the reinstatement of the iconic rally back to the FIA WRC calendar by maintaining safety of competitors and spectators.

“The Safari Rally in Kenya remains a key promoter of sports tourism. Many foreign teams have on numerous occasions graced the eight-leg Kenya National Rally Championship.

“Promotion of sports tourism can be exemplified here by good organisation and influx of state of the art machinery. We can ascend to higher heights if we enhance safety measures by taking our events to private farm stages,” said Wario.