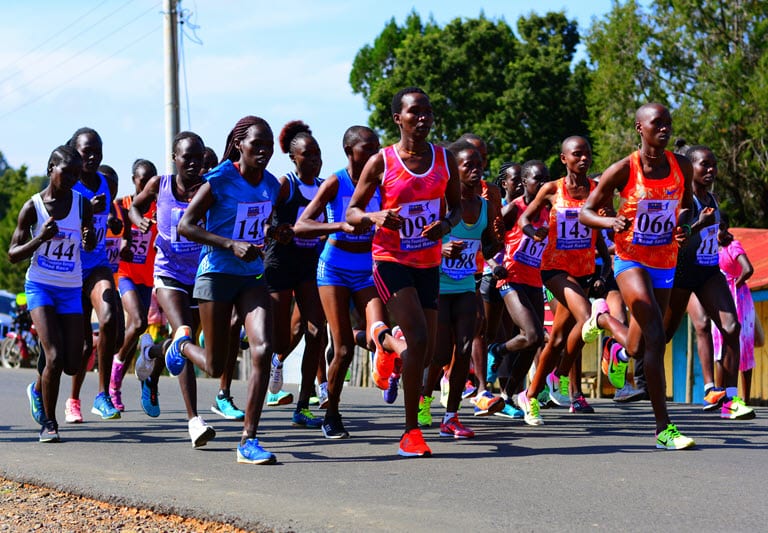 Sandra Chebet and Vincent Kiprotich won their respective men and women’s races during this year’s Lotto Foundation Baringo 10km road race. Fresh from winning Isaiah Kiplagat Memorial Cross Country in Ndalat Nandi County, Sandrafelis ran a brilliant race, sticking with the leading pack for the first nine kilometers before shaking them off in the last kilometre to win the race in 33:34.05. Sandrafelis beat her training partner, Beatrice Chebet to second place. Chebet, who is also World Under-20 5,000m champion, clocked 33:47.16 while Antonina Kwambai was third in 34:00:35. In an interview, Sandrafelis admitted that she is enjoying top form and this was part of her preparations for the forthcoming World Cross Championships in March next year in Denmark. “I am currently enjoying top form and iI am glad I achieved my target of winning the race. The competition was tough and I had to give it my all especially in the last kilometer,” said Sandrafelis. Chebet on her part said she is happy to have participated in a senior race and finished second. “I’m happy my training partner won the race. We prepared well with her and I’m using the races to prepare for the cross country series as I hope to make Team Kenya to the World Cross Country Championships,” she said. Both athletes are training in Londiani in Kericho County and are expected to feature in this season Athletics Kenya (AK) Cross Country series. In men’s race, Kiprotich from Elgeyo Marakwet defended his title after winning in 28:45.97. Ezra Kipketer came in second in 29:22.95 while Gilbert Kimunyan sealed the podium in 29:24.97. Kiprotich said he was using the race to prepare for the cross series. “The race was tough but I’m happy I defended my title. I want to be in the Kenya team to the World Cross Country Championships and this is part of my build up for the series,” said the athlete. In the 6km girls cross country, Agnes Jebet won the race in 19:51.16 ahead of Zenah Jemutai who clocked 20:13.98 while Deborah Chemutai was in third place in 20:17.08. In the boys 6km, Gideon Rono led in 17:18.81 ahead of Kelvin Kibiwott who ran 17:29.73. Abel Kiplimo sealed the podium three in 17:32.29. The race was also sponsored by Kenya Tourism Fund. SELECTED RESULTS