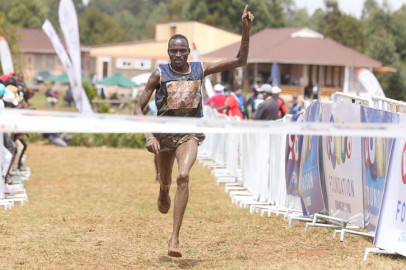 In the Men's race, Chebolei who represented North Rift upstaged favourites when he took the lead with 4km to go and held on to cross the finish line in 28:29.8

Samuel Chebolei and Joyce Chepkemoi are the new National Cross Country champions after taking victories in the senior 10km races at the championships held Saturday at the Lobo Village in Eldoret, Uasin Gishu County.

In the Men's race, Chebolei who represented North Rift upstaged favourites when he took the lead with 4km to go and held on to cross the finish line in 29:28.8.

The national competition doubled up as a curtain raising event for the upcoming World Continental Tour Cross Country Championships that will be held next month at the same venue.

Kennedy Kiprop of Western finished second in 29:35.2 with Vincent Kiprotich of Central Rift closing the podium after timing 30:02.6

"It was a good race since I have won my first title at the senior level. Though I was wary of the tough competition from the like of Michael Kibet whom I have competed against in many races," said Chebolei in his post-race interview.

In the women's race, Chepkemoi of the Kenya Defence Forces ran a tactical race trailing world marathon champion Ruth Chepengetich in the opening stages of the race.

World 5000m silver medallist Margaret Chelimo and former World Under-20 3000m steeplechase champion Cellphine Chespol were also in a break-out pack of six who went for an early lead.

Chepkemoi would take over the lead with about half the distance covered and held on to win in 34:00.0

Chelimo of National Police Service came home second in 34:01.8 with Chespol of Kenya Prisons Services settling for third in 34:23.3.

"I thank God for enabling me to win this very competitive race. The course was very challenging but I managed to win and improve on my seventh-place finish last year. I also hope to compete at the World Cross Country Tour next month," said Chepkemoi.