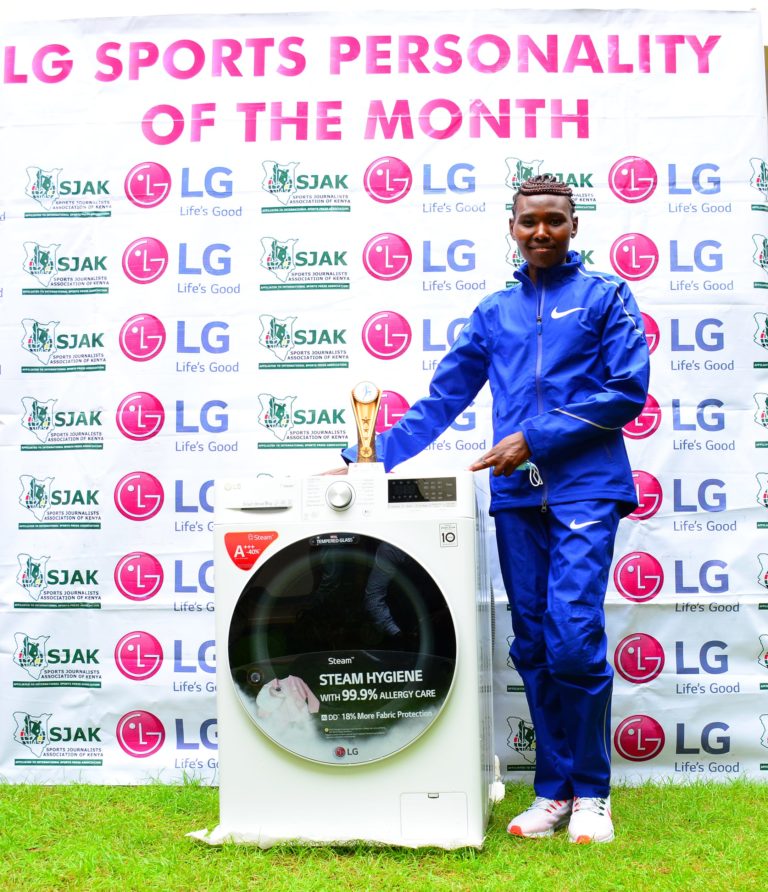 Reigning world marathon champion Ruth Chepng’etich is the LG/SJAK Sports Personality of the Month for April following her superb performance in the Kolay Istanbul Half Marathon, where she posted a new world record of 1:04:02 hours.

The 26-year-old beat the previous record, set 14 months ago by Ethiopia’s Ababel Yeshaneh, by 29 seconds. Her spirited dash from gun to tape didn’t just wow millions of fans who followed live the proceedings, she was also outstanding throughout the race.

Other nominees floored by Chepng’etich were Meldine Sande who led Kenya Prisons to third position at the CAVB Women’s Club Championship and rugby star Daniel Taabu who scored 7 tries for Kenya Sevens at the Emirates Invitational in Dubai.

On her way up, Chepng’etich has remained aggressive and level-headed.

Chepng’etich was all smiles upon receiving the award from title Sponsors LG.

A jubilant Chepng’etich had to say: “It’s always such a great feeling when you know you have beaten the best of the best and you are a cut above the rest. And it’s unbelievable when you know you have defeated great sportsmen like Tundo who is a multiple Safari and Kenya National Rally Champion and Eliud Kipchoge who needs no introduction in marathon running.”

Chepng’etich joins the growing list of sportsmen and women to have won the coveted title this season.

The LG sponsored award continues to whip up the enthusiasm of sports personalities across the country.

LG Electronics corporate communications manager Maureen Kemunto while congratulating Chepng’etich , noted that the company is proud to be a part of an initiative which rewards excellence.

“Our partnership with SJAK goes a long way in bolstering athletes talent and empowering them to be the backbone of sports in the country. Being an Olympic year, sports personalities are giving their all to uphold higher standards hence the need to motivate their efforts”

SJAK President Chris Mbaisi, on his part, thanked LG Electronics for their unswerving support saying the partnership continues to make a gingantic difference in the promotion of sporting activities across the country.

“With the Award running on a monthly basis, sportsmen and women can look forward to greater heights in sport- so thrills and spills are guaranteed in the season as we move forward.”