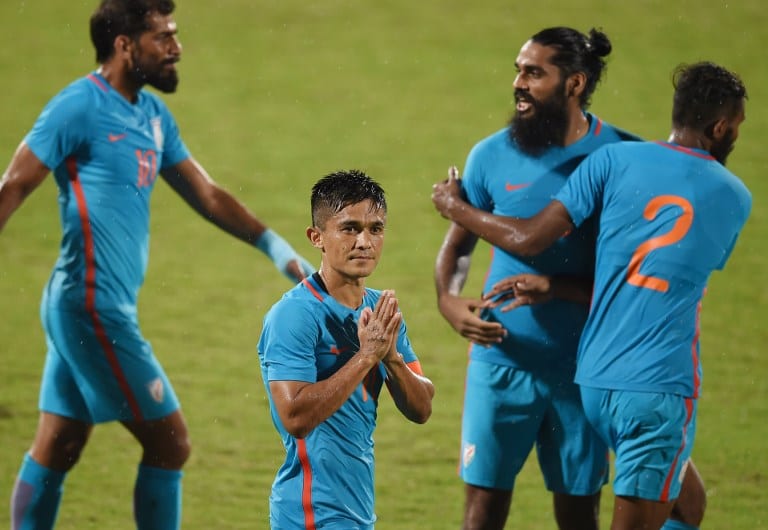 Thousands answered India captain Sunil Chhetri’s emotional plea for football fans to turn out and support the team in their international against Kenya on Monday after earlier matches saw scant attendance.

And Chhetri did not disappoint the home crowd with two goals in his 100th international appearance as India won their second successive match of the Intercontinental Cup with a 3-0 victory.

The 9,000-odd crowd went up in unison as Chhetri scored the opening goal in the 68th minute via a penalty and then found the net in injury time.

While tickets were sold out, there were some empty seats in the nearly 10,000 capacity stadium as rains lashed Mumbai and players battled slushy on-field conditions.

“We are definitely going to fight and lose some games but if this is what we are going to get then we are going to give our lives on the pitch. This was something special,” said the 33-year-old Chhetri.

The cheering crowd at the Mumbai Football Arena was a turnaround from the mere 2,569 who turned out to watch India thrash Taiwan 5-0 last week.

‘Come and watch us’

A disheartened Chhetri, who scored a hat-trick in that match, had said in a Twitter video: “To everyone who has lost hope in Indian football I request you to come and watch us in the stadiums.

“It is not fun to criticise and abuse on the internet, come to the stadium and do it on our face.

“Scream at us, shout at us, abuse us, who knows one day we might change you guys,” he added in the message that he said was directed particularly at fans of the big European clubs.

“Agreed, the level is not the same, not even close but with our desire and determination, we will try our best to make your time worth it.”

The national team are 97th in the FIFA rankings, having risen from 166th in 2015 when English coach Stephen Constantine was appointed.

But cricket dominates Indian sport and they are number one in the Test rankings.

Cricket superstars Kohli and Tendulkar both took to Twitter to back the football player after previous games opened to near-empty stadiums.

Only a few hundred turned up to see Kenya play New Zealand in the four-nation tournament on Saturday.

Lotia, whose YouTube channel Be YouNick has more than 1.7 million subscribers, invited fans to use the tickets for free.

“Have booked entire STAND NUMBER 4 for all you football fanatics! All you have to do is just be there and cheer!” Lotia, an ardent football fan, wrote on Twitter.