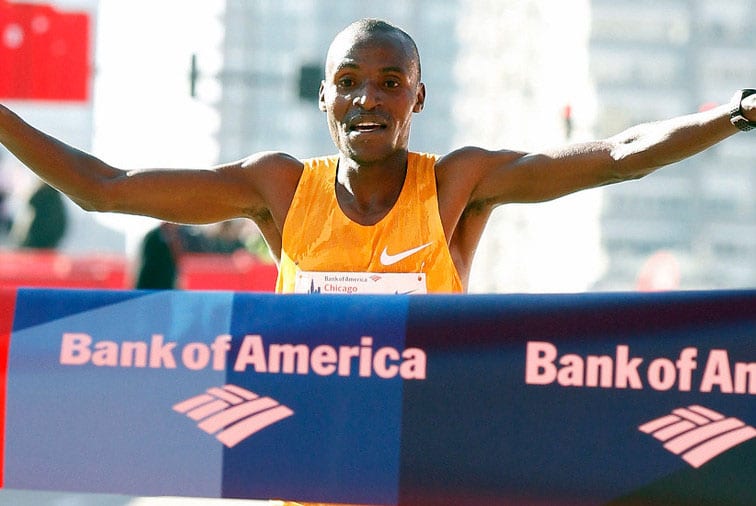 Runners from around the world have descended on the third most populous city of the United States for Sunday’s Bank of America Chicago Marathon where all attention will be fixed on two Kenyans as the battle for honours in the elite races unfolds.

Dickson Chumba and Florence Kiplagat, both 29, were crowned the king and queen of Chicago last year where more than 37,000 runners crossed the finish line and return to the city under pressure to deliver their first victories in the World Marathon Majors (WMM) circuit this year.

Both were beaten to third in Tokyo (2:07:34) and London (2:23:39) during the spring marathon season in February and April and are in danger of disappearing from the radar of top ultimate distance runners if they fall short of holding on to their titles.

According to organisers, the marathon continues to provide significant growth to Chicago’s economy, with the 2015 race delivering an estimated staggering USD277m (Ksh28.05b) in total business impact to the city, an increase of more than nine percent compared to 2014 with the performance of the champions of the elite race helping to fuel broadcast and advertising revenue.

The titleholders have their reputations at stake since they are not among the top five in the race for a share of the USD1m (Ksh102m) 2016/17 WMM lucrative jackpot.

Victory on Sunday will catapult Kiplagat to second on 34 points behind women’s front runner and Olympics champion, Jemimah Sumgong (50) while Chumba will jump above Wilson Kipsang (17) to fourth with 25 in the men’s running.

Chumba, who took the men’s race in 2:09:25 as stormy weather wrecked havoc on the field, is chasing his third Majors win after victory in the 2014 Tokyo race and Chicago last year whilst Kiplagat is seeking a fourth after claiming Berlin twice before winning here in 2015.

“The race was good. Maybe next year to win, I need to run maybe a faster time,” Chumba said after winning last year.

Chumba was relatively unknown until he snagged a win and course record at the 2014 Tokyo Marathon.

He followed that performance with a third-place showing at the 2014 Chicago Marathon with his personal best time, 2:04:32. Chumba returns to the Marathon this year looking to hold on to his crown.

Chumba belongs to the 2RunningClub led by Italian coach, Claudio Berardelli that was thrown into disarray when their boss was arrested and charged on doping related offences.

Speaking at the team’s camp in Kapsabet when a team from the IAAF Day in Life programme called on them, Chumba came in robust defence of their coach who was formerly of the Italian Rosa Associati firm that is also embroiled in a legal tussle over doping.

“As athletes we are not stupid. We followed Claudio to 2Running because we know what he does for us and how he has made us improve our performances by giving us programmes that are suited for every individual need.

“We know what is right and wrong for us and those who engage in doping do so because they are greedy and are giving our sport a bad name. Since I started working with Claudio, everything has come due to the hard work we put in training, no short cuts and I have been patient enough to wait,” the Chicago champion underscored.

He is the figurehead in a group that includes Paris winner, Cyprian Kotut, Rome champion, Amos Kipruto and Evans Chebet who was third at the Berlin Marathon a fortnight ago as the 2Running Club establishes itself as a force to reckon with in modern distance running.

Former champion, Tsegay Kebede of Ethiopia who held the then course record of 2:04:38 in 2012 as well as compatriots, former world 10K record holder, Micah Kogo and Stephen Sambu are among the runners to watch in the men’s race.

Kebede is remembered in Chicago for his epic showdown in their 2010 head-to-head race that resulted in a runner-up finish against the late Samuel Wanjiru who won his last marathon before his untimely death on May 15, 2011.

A 2008 Olympic bronze medallist, the Ethiopian has finished in the top 10 of 15 Abbott World Marathon Majors races.

While Kogo does not have a marathon victory on his resume, he earned a bronze medal in the 10,000-meters at the 2008 Olympics. He’s established a strong track career. He set his marathon personal record in 2013 with a time of 2:06:56 for fourth place.

“Since I was the only Kenyan in the race last year, I knew I had to take advantage of the opportunity and go for the gold.

“The course is tough and but I believe I’m the best among the rest,” Kiplagat told Citizen Digital before leaving for the States.

“It has always been my dream to represent the country at the Olympics level and it remains my number one goal, which I need to achieve. Before people start criticizing me they should know that I have an experience of 10 years and seven months on the road.

I wonder why they told me I would watch the Games on TV instead of actually participating in it. I know I would have performed well and also brought a medal.  I have never missed a medal in any race I have participated in,” she added, with the pain of missing selection only too evident.

“I think it’s only in 2009 where I had a fracture on my leg at the Berlin world Championships and finished number twelve. Although in the same year I went for World Cross Country Championships and brought home two gold medals, as an individual and as a team,” she stressed in laying her credentials in the national team.

The internal competition in Chicago for the champion comes for Kiplagat comes in the shape of two-time world marathon champion, Edna Kiplagat, Paris winner, Visiline Jepkesho who made the Rio 2016 team Valentine Kipketer and former junior champion Purity Rionoripo.

Kiplagat who is targeting to run under 2:22:00 on Sunday said she had recovered well since finishing third in London as she focused on speed and endurance in her preparations for Chicago.

“When I will step on the Chicago course I will do it for my kids and my fans, I shall not be there because I did not make it to Team Kenya it will my individual race.

“I will put my best foot forward and defend my title it will silence my critics and let the selectors know they made the wrong choices. I have got no pressure. Right now we have shifted our focus to 2020 Japan Olympics,” she affirmed.

Kiplagat says her performance in Chicago will determine whether or not she will be interested in the 2017 IAAF World Championships in London.

Outside Kenya, Ethiopian Boston winner Atsede Baysa (2:29:19) who is a two-time Chicago champions (2010 and 2012) will be the runner to beat with compatriot Belese also returning to go for the crown after losing it to Kiplagat.

Since its inaugural running in 1977, the Chicago Marathon has developed a global reputation for its fast, record-setting course.

Year after year the Bank of America Chicago Marathon hosts representatives from more than 100 countries and all 50 of the United States to compete on this world stage, while the flat city landscape and cool fall climate combine to provide the best backdrop for posting records – personal, national and world.