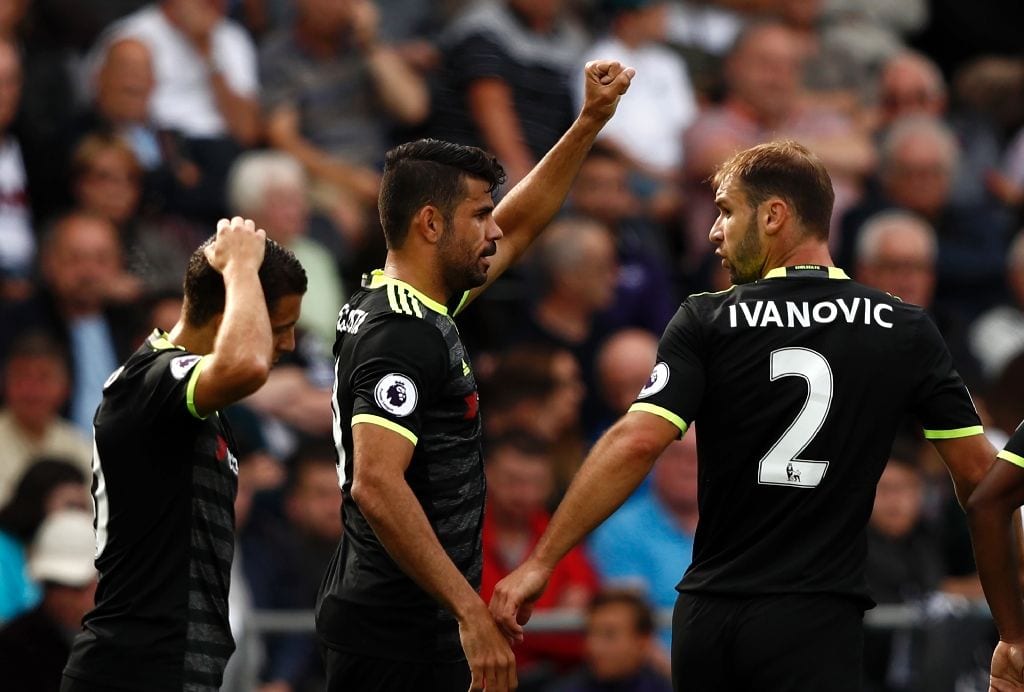 Antonio Conte launched an impassioned defence of brilliant but controversial forward Diego Costa after the Italian dropped his first points in English football as Chelsea were held 2-2 at Swansea City.

The Spanish international scored his team’s two goals on Sunday, was booked and was also on the receiving end of rough treatment from Swansea defenders Jordi Amat and Federico Fernandez, both of whom were cautioned for fouls on Costa.

Amat, in particular, was fortunate not to earn a second yellow and Conte praised his star man for showing great composure despite the provocation.

“If you ask me that the defender deserves the second yellow card I don’t want to reply about this,” said the Chelsea manager.

“I only want to tell that after every game they press ask me about Diego and his behaviour and today (Sunday) I can tell that Diego Costa had a fantastic behaviour to control the situation because today he took a lot of kicks from the first minute until the end of the game.

“Today I am pleased because he showed me and his teammates that he has fantastic behaviour. It was not easy.

“I think the defenders know him and sometimes they try to provoke him. It is normal in football.

“Diego is a player with great passion and they try to provoke. But this is football not only in England and not only with Diego but I think the referee must see and permit Diego Costa to play his football.”

Chelsea keeper Thibaut Courtois was judged to have fouled Gylfi Sigurdsson who struck an equalising penalty before Leroy Fer appeared to impede Gary Cahill in winning the ball and advancing to score a second goal.

A spectacular late overhead kick from Costa earned Chelsea a point although they failed to maintain a perfect start to the campaign and join Manchester City in first place.

“For the second goal I think everyone can see that the tackle was a foul on Cahill,” said Conte of referee Andre Marriner’s decision. “And I think there is a great mistake by the referee.

“But I also want say that this can happen to one side or the other. I don’t want to complain about this but it is the reality. It is a pity.”

Chelsea move on to a home game against in-form Liverpool on Friday although veteran defender John Terry is a doubt having left the stadium on crutches with an ankle injury.

“I don’t know the extent of the injury but tomorrow we will see the situation about his ankle,” said Conte. “But he is a warrior. I am not worried.”

Swansea manager Francesco Guidolin echoed his opposite number’s support for Costa and praised his attitude.

“Costa is a champion, he is strong striker, he is a fighter,” said the Italian. “He is one of the best strikers in the world.

“He is a good player not only with the feet or scoring goals but because he is able to pay alone against three or four defenders.”

Guidolin also revealed he apologised to defender Neil Taylor for substituting him before half-time as Chelsea’s superiority forced him into a drastic tactical re-shuffle.

Guidolin moved from a three-man defence to a more familiar back four and Taylor was the player sacrificed, much to his dissatisfaction.

“I apologised in the dressing room,” said Guidolin. “Neil is a clever guy. I think he understands.

“But I made a mistake because I could, I should have waited three minutes but Mo Barrow was ready for five minutes before and I decided to do it in this way.”