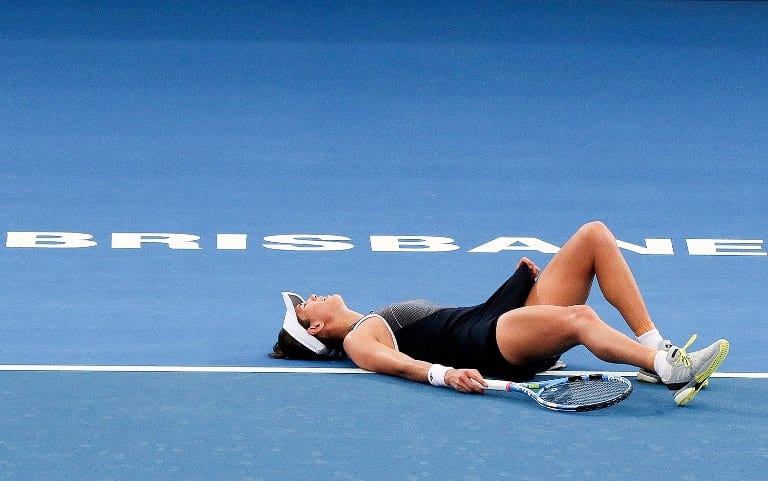 Spain’s world number three Garbine Muguruza was forced out of the Sydney International with an injury following her win over Kiki Bertens on Wednesday.

A week after retiring from the Brisbane International with cramps, leading Australian Open contender Muguruza had an early medical timeout for a thigh injury before beating Bertens 6-3, 7-6 (8/6).

But the win came at a cost. The Wimbledon champion later announced she would be pulling out of the tournament, handing Australian Daria Gavrilova direct passage to the semi-finals.

Muguruza’s decision comes less than a week out from the Australian Open in Melbourne.

“I am disappointed but I have talked to the WTA doctors and my team after the match today and following their recommendation, I have to withdraw from the tournament,” Muguruza said.

“I have felt pain in my right adductor since I started practising here.

“Yesterday I felt better and wanted to play. However, during the match today the pain has been there all the time but I wanted to compete.”

Muguruza was leading 2-1 in the opening set when she sought a medical time-out.

She showed few ill-effects upon her return to the court, reeling off six of the next eight games to take a commanding lead against the 32nd-ranked Dutchwoman.

The Spanish top seed claimed the first set before needing a tiebreaker to see off her opponent.

Gavrilova downed Samantha Stosur in their all-Australian second round night match 6-4, 6-2 and will benefit from Muguruza’s setback to advance to the last four.

In the men’s event, Spanish top seed Albert Ramos-Vinolas was knocked out by Italy’s Paolo Lorenzi 6-3, 7-5.

The Spanish world number 22 needed treatment for a leg problem early in the second set but continued playing, without success, as Lorenzi moved into the quarter-finals.

The Italian will play Russian qualifier Daniil Medvedev for a semi-final berth.

French pair Adrian Mannarino and Benoit Paire progressed to the last eight with victories on Wednesday.

Rising Australian star Alex de Minaur has a quarter-final with Spaniard Feliciano Lopez after his opponent Damir Dzumhur — 30th in the world rankings — retired when the youngster was leading 6-2 3-0.