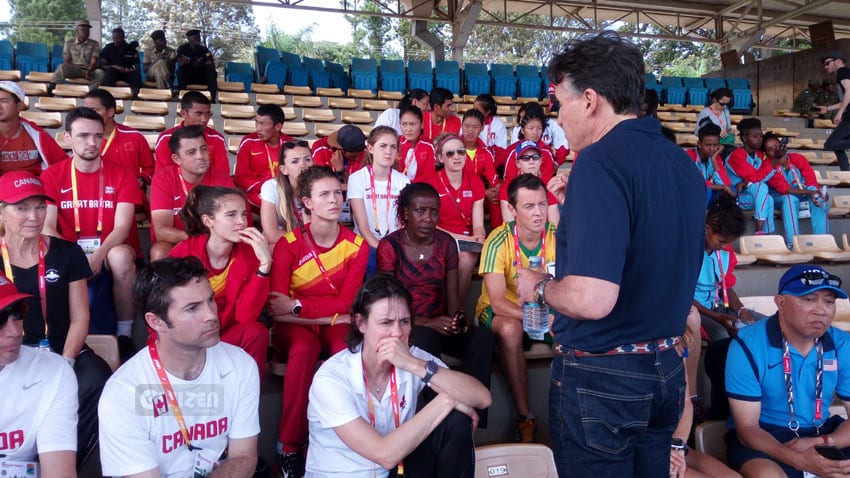 Speaking to a group of athletes from China, Canada, Australia, United States, Denmark, Eritrea and Spain at the Kololo Independence Grounds in Uganda on the eve of the 42nd edition of the World Cross on Friday evening, Lord Coe also assured the runners everything was being done to clean up the sport.

“Cross Country is one of the most important elements in preparing for the track season and as a distance runner in the past, I used to take part in it. In other part of the world including Europe where I come from, performances in distance races are not impressive since coaches are not keen on cross country,” the world governing body chief remarked.

He encouraged the cross section of runners to emulate the example of Kenyan legend and five-time World Cross senior men champion, Paul Tergat who was besides him.

“Paul is a living example of how you can excel at the Cross Country and have a great career on track,” Coe said as he recounted his losing margin to Ethiopian Haile Gebrselassie at the Sydney 2000 Olympics in the men 10,000m final that was closer than the difference between the gold and silver winners in the men 100m.

“That is the most remarkable race I have ever watched,” Coe said as the athletes who were open-mouthed as he narrated the story cheered for Tergat.

It comes as most European and other developed nations have seen dwindling interest with the World Cross that led the IAAF to make it biennial from the 2011 edition in Punta Umbria, Spain.

In an effort to reinvigorate the event, the 2017 Kampala edition will witness the first Mixed Relay competition where the two kilometre distance covered by competitors is aimed at encouraging many participants from the first world to take part in an event dominated by Kenyan and Ethiopian athletes for two decades.

On doping, Coe announced the IAAF had reduced the cases of the Therapeutic Exemption Use (TUEs) and ensuring those allowed to use medicine to treat ailments were not using performance enhancing drugs.

“We have made the process of accessing TUEs more rigorous than ever before and this year we only had 26 cases down from hundreds when it started,” he underlined.

He then took the athletes through the pillars of reform he is championing at the IAAF where stringent doping control forms a key part.

On concerns raised by some athletes of the imbalances in the anti-doping protocol and result management in some parts of the world especially Africa, Coe re-assured his audience the process was standardised globally.

He however, criticised criminalising doping in some countries including Kenya and Ethiopia.

“We have strict sanctions in place to punish cheating runners including four year to life bans from the sport and subjecting them to further action is not in the spirit of competition,” Coe added.

Dressed in a polo shirt and denim, Coe engaged with the athletes after conducting a tour of the Kololo Grounds in what was a departure from the norm where the IAAF President savoured the VIP treatment at every turn.

The former Britain Olympics gold medallist and 800m world record holder has embarked on ambitious reforms to restore the credibility of the IAAF following and the doping and corruption scandal that has seen his predecessor, Lamine Diack placed under house arrest in France.