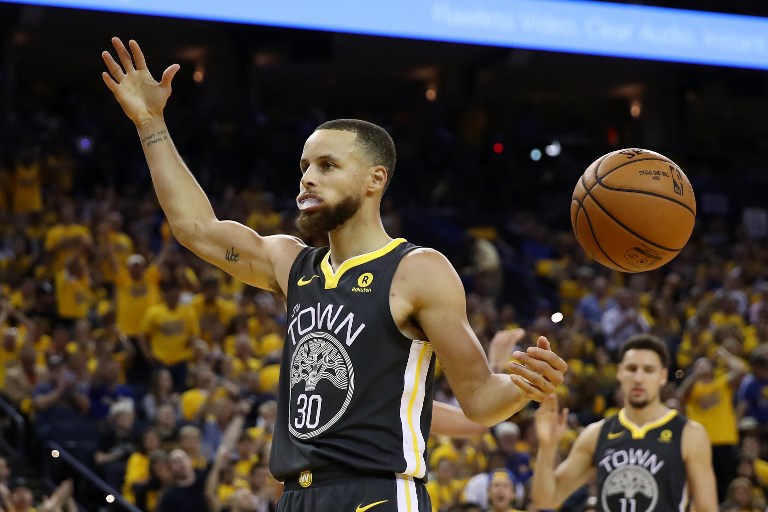 Curry scored 33 points on 11-of-26 shooting from the floor, hitting 9-of-17 from 3-point range, with seven rebounds and eight assists as Golden State seized a 2-0 lead in the best-of-seven championship series.

“To be on top of that 3-point list is pretty special,” Curry said.

“Pretty special night. And hopefully some more special things happen when we get two more wins.”

The Warriors, who never trailed, can sweep the series with wins in Cleveland on Wednesday and Friday.

Curry, a 30-year-old guard, broke the old mark of eight 3-pointers in a finals game set by Ray Allen of Boston in 2010.

“He was tremendous,” Warriors coach Steve Kerr said. “Nine threes and seemed to hit the big shot every time we needed one. Yeah, he was fantastic.”

Curry scored 16 points in the fourth quarter, including a corner 3-pointer, a desperation heave from 35 feet and the record breaker from the left side with 3:30 remaining.

“He makes tough shots. That’s what he does,” Cavaliers coach Tyronn Lue said. “Once he releases it, (if) he sees the basket, he usually makes it.”

Cavaliers superstar LeBron James netted 29 points with 13 assists and nine rebounds while Kevin Love added 22 points and 10 rebounds, but Cleveland came no closer than five points in the second half.

The Cavaliers and Warriors are meeting for the fourth consecutive NBA Finals, with Golden State having won titles in 2015 and 2017 while Cleveland captured the 2016 crown, rallying from a 3-1 deficit in the greatest comeback in finals history.

“We’re happy with the way we played,” Kerr said. “But we know this is just getting started.”

After an overtime opener loss James called one of the worst defeats of his career, the Cavaliers couldn’t play Golden State as close, Curry and his teammates thwarting every threat.

“You definitely notice the looks on their faces when he hit some of the shots,” Warriors forward Draymond Green said of the Cavaliers.

“It was like dagger after dagger. Play great defense and he pulled up and hit a three in your face. You definitely notice the effect that it has on the opposing team.”

Cavs guard J.R. Smith, whose late-game blunder in the opener denied Cleveland a potential winning shot, was greeted with a standing ovation by Warriors fans and chants of “M-V-P” when he went to the free throw line.

Smith went 2-of-9 from the floor and scored only five points in what he called a “terrible” performance, but said the crowd wasn’t a factor.

“I’m always a person the fans like to heckle. I like it,” Smith said. “I’d rather them do that than not acknowledge me at all. I appreciate it.”

“We have confidence in J.R,” Lue said. “He’s got to keep taking his shots.

“In that third quarter I thought we did a good job,” Lue added. “We did a great job of attacking offensively and playing more physically defensively. I was proud of our guys the way we competed. We could have let go of the rope down 13.”

Cleveland pulled within five points three times in the third quarter but the Warriors carried a 90-80 lead after three quarters.

“You’ve got to withstand that kind of stuff and keep playing and keep going,” Kerr said. “Our guys did a good job of that.”

James opened the fourth quarter with a 3-pointer but Curry followed with back-to-back 3-pointers for a 96-83 Warriors edge and sank a desperation heave for a 103-89 edge.

“That was kind of like a dagger shot,” teammate Thompson said.