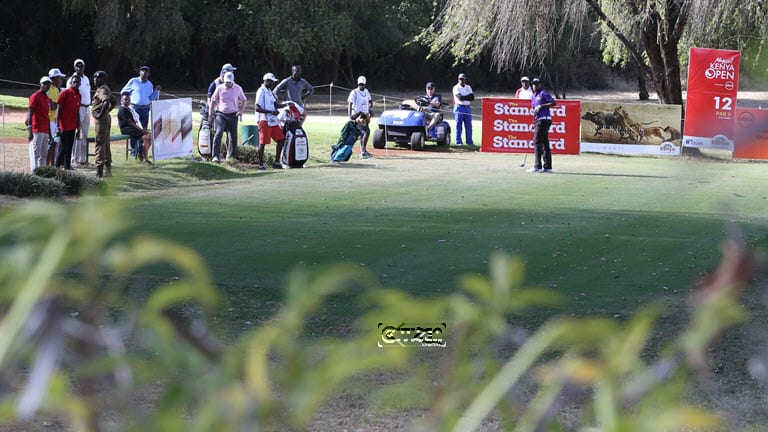 Louis de Jager made himself feel right at home as he posted a 66 to take a four shot lead into the weekend at the Magical Kenya Open.

The South African entered round two at Karen Country Club with a share of the lead and – in the favourable calm morning conditions – combined seven birdies with two bogeys to jump to 12 under.

That beat his previous best 36 hole score on the European Tour by three shots and his four shot advantage equals the most so far this season along with Aaron Rai at the Honma Hong Kong Open presented by Amundi – which the Englishman went on to win.

Arnaus was eight shots better on the back nine than the front in an afternoon 68, while Englishman Singh Brar signed for a 70.

De Jager came through the Qualifying School at the sixth attempt last season and was glad to be feeling at home both back in Africa and on the European Tour.

“I told the guys when we played a practice round on Tuesday, after the desert, you could feel you were in Africa, back in our continent,” he said.

“You get used to the feel of the kikuyu and the ball travels the same as back home in Pretoria, distance wise, so it really feels like we’re back home.

“I had to find my feet a bit at the start of the season but I’m felling comfortable out here, this is where I belong.

“I started off birdie-birdie and it got me in the right mindset for the round. I kept it going, kept it on the fairways, kept hitting the greens and made a few putts.”

Singh Brar birdied the first to move into the solo lead but then made six pars in a row as De Jager got off to a fast start of his own.

The 31-year-old birdied the tenth, 11th and 13th to reach double figures, with Singh Brar making a gain on the eighth from three feet to be within one as he reached the turn.

De Jager made a fourth birdie of the day on the 18th and when Singh Brar bogeyed the 12th, the lead was three shots.

The leader three putted the second green for a first bogey of the day but put his approach to five feet on the next for an instant response.

Singh Brar made another bogey on the 14th but birdied the 17th, while De Jager bogeyed the fifth but hit back on the par five sixth before taking advantage of the driveable ninth from ten feet.

Arnaus went bogey-double bogey on the third and fourth and while he bounced back on the next, another bogey followed on the seventh to turn in 38.

The 24-year-old then made two putt birdies on the par five 11th and 12th and an eight foot putt on the next had him back level for the day.

A tee shot to eight feet on the 16th brought another birdie and he drove the par four next and holed from the fringe on the last for a closing hat-trick.

Last week’s winner Harding birdied his last four holes in a 65, Migliozzi made four birdies and a bogey in a 68, and Bhullar was left to rue two late dropped shots in a 70.

Scot Liam Johnston and Wales’ Stuart Manley were at six under, a shot ahead of Canadian Aaron Cockerill, Frenchman Romain Langasque, Finn Kalle Samooja and Spaniard Gonzalo Fernandez-Castaño, who matched the lowest nine of the season with a seven under 28 on the front side – his back nine.