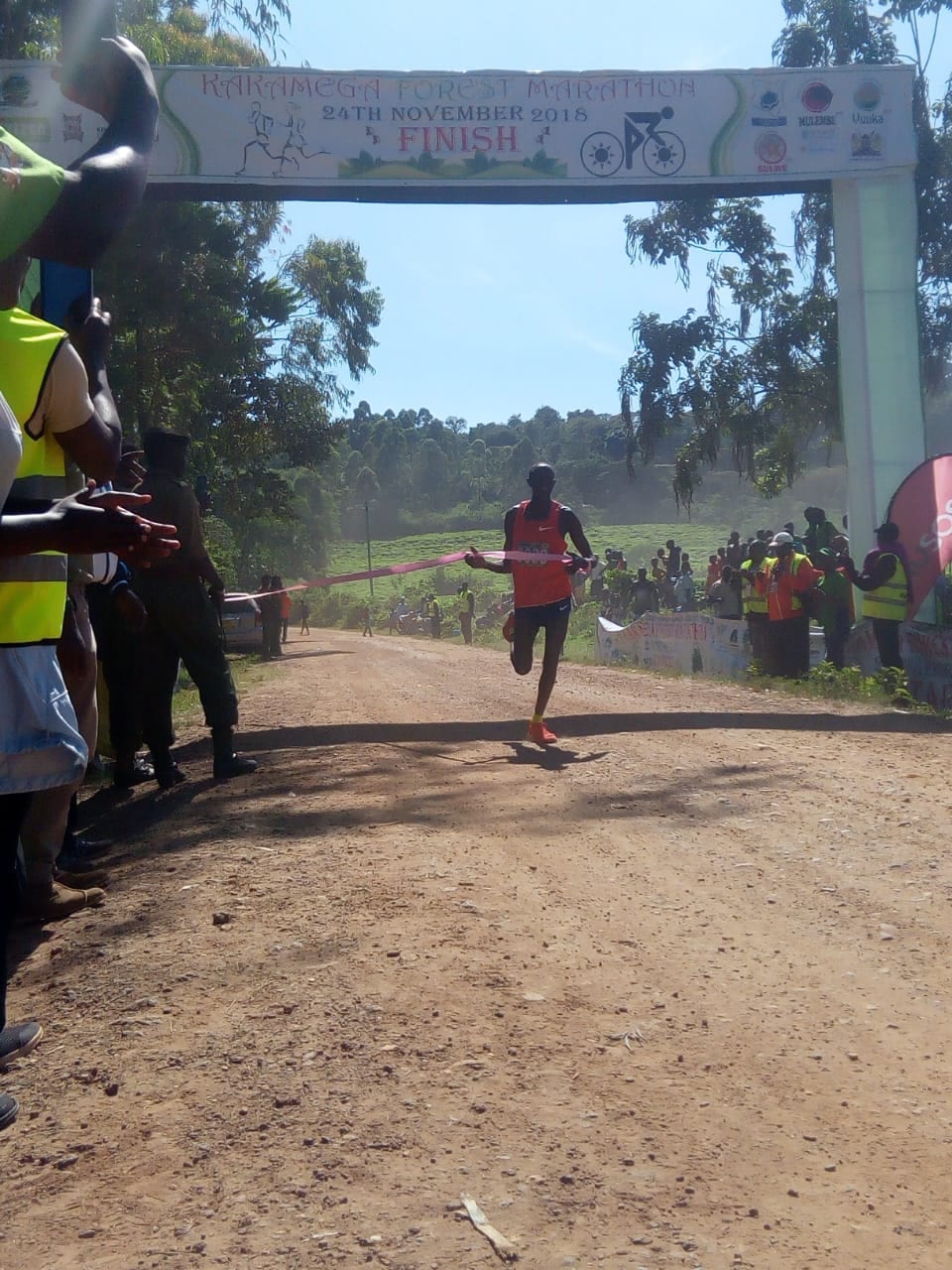 Justus Kimutai and Lilian Matelong are the winners of the fourth edition of the Kakamega Forest Marathon held on Saturday in Shinyalu, Kakamega County.

Kimutai crossed the line in a time of two hours, 18 minutes, and six seconds ahead of Mathew Kemboi who clocked 2:21.44 while Hosea Mwok completed the podium places in a time of 2:22.26.

Kimutai who is based in Kapsait, Elgeyo Marakwet county said the weather conditions across the tropical forest was favourable; a key factor to his victory.

” I enjoyed the race from start to finish which  I can attribute to the similarity of the environment of Kakamega and Kapsait where I train,” said Kimutai.

The 25-year-old finished second runners up at this year’s Lisbon Marathon held in October a result he hopes to build on in 2019.

” Right now I am going to rest but I will be targeting a number of races next year so I was using this race as my part of preparations,” added Kimutai.

In the corresponding women race, Lilian Matelong who was also making her debut at the race strolled to victory after she clocked 2:18.06, ahead of the second-placed Faith Cheruto who clocked 2:21.44 as Hosea Mwok settled for the second runners up spot in a time of 2:49.35.

Matelong who took the lead at the 36km mark after trailing the leading pack for the better part of the race said running inside the forest provided ideal conditions for her.

” At first I struggled with the sunny conditions but since we were running in the forest the situation got better and after that I managed to win the race,” Matelong said.

The Kericho-based athlete had finished fifth at this year’s Standard Chartered Nairobi Marathon.

In the 21km race, the in-form Brigid Kosgei was once again on her best as she cruised to victory in a time of one hour, 12 minutes, and 36 seconds ahead of Joyce Chepkemoi who settled for the first runners up spot by clocking 1:16.40.She was followed by Gladys Kipsoi who crossed the finish line in 1:17.56.

The Chicago Marathon champion said she opted to participate in the half marathon in order to work out on her speedwork ahead of a looming busy schedule in 2019.

” I chose to participate in the half marathon for my speed-work ahead of next year,” said Kosgei.

It was a successful season for the 24 -year-old where apart from winning the Chicago Marathon in October, she also managed to clinch silver in the 2018 London Marathon where she finished behind her compatriot Vivian Cheruiyot.

“I am actually happy on how my season went where I finished second in London Marathon and recently won the Chicago marathon. I am now slowly building for next year,” added Kosgei.

In the men’s front, Kiptum who trains at Kaptagat, Uasin Gishu County took the honours in  1:04: 41 ahead of Bernard Kibet who settled for silver after clocking 1:04.54.

Daniel Kiprotich came in third after crossing the finish line in 1:05.02.

The 42km race started at the Solyo grounds and ended at Chelobani, in the outskirts of the thick and dense Kakamega Forest in Shinyalu.

Apart from the two events (Full and half marathon), 15km race both for men and women was also held.

The marathon is an annual event founded by the Kakamega Heritage Foundation in 2014 with an aim of conserving the Kakamega Forest which is one of the rare tropical rain forest in Africa.