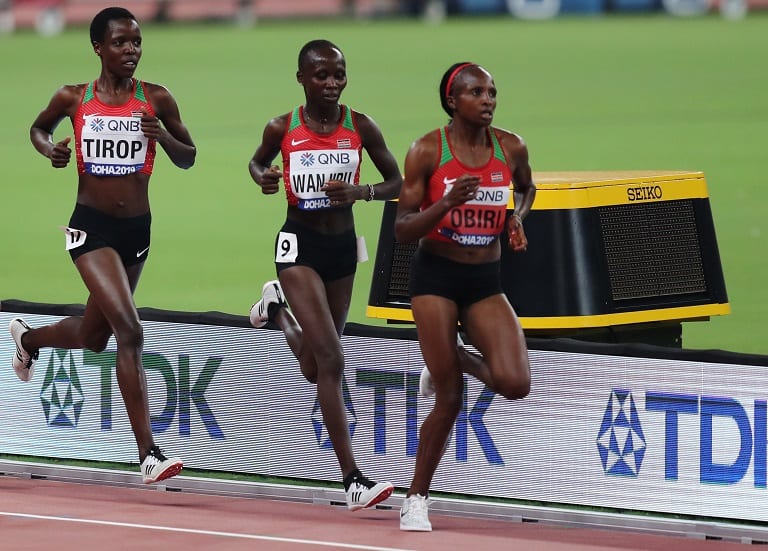 Hellen Obiri says her podium miss in the 10,000m could be her final race at the 2019 IAAF World Championships in Doha, suggesting the might not defend her 5,000m title.

Obiri could not hide her frustrations after slipping back into fifth despite leading the latter stages and arriving in the Qatari capital as the top ranked female over the distance.

“The race had a high pace, despite the nice weather in the stadium my body failed to respond, psychologically it has affected me and I will wait till Monday before making the decision,” Obiri said.

She however believes the situation which replicated Rio 2016 where Vivian Cheruiyot lost the 10,000m but Obiri inspired her to win the 5000m.

“I have had a long season, so many races but winning the cross country ealier in the year is a consolation to me,” said Obiri.

Dutch Sifan Hassan who is aiming for a unprecedented triple this year won the Gold medal in a world leading time of 30:17:62 ahead of Letesenbet Gidey of Ethiopia, 30:21.23.

Agnes Jebet Tirop won Kenya her second medal in the ongoing World Athletics Championship in Doha, Qatar after clocking a personal best of 30:25:20 to finish third in the Women’s 10,000 meters final.

Efforts to shake off the Ethiopian opponents early made work difficult for Kenyan’s who had a proper plan to take a clean sweep.

“Our aim was to take all the three medals, but this bronze is like gold to me, Ethiopians dint try at any time to go ahead they stayed behind us and it was not easy to shake them off it ended up helping Sifan Hassan who used her pace to easily win,” Tirop told Citizen Digital.