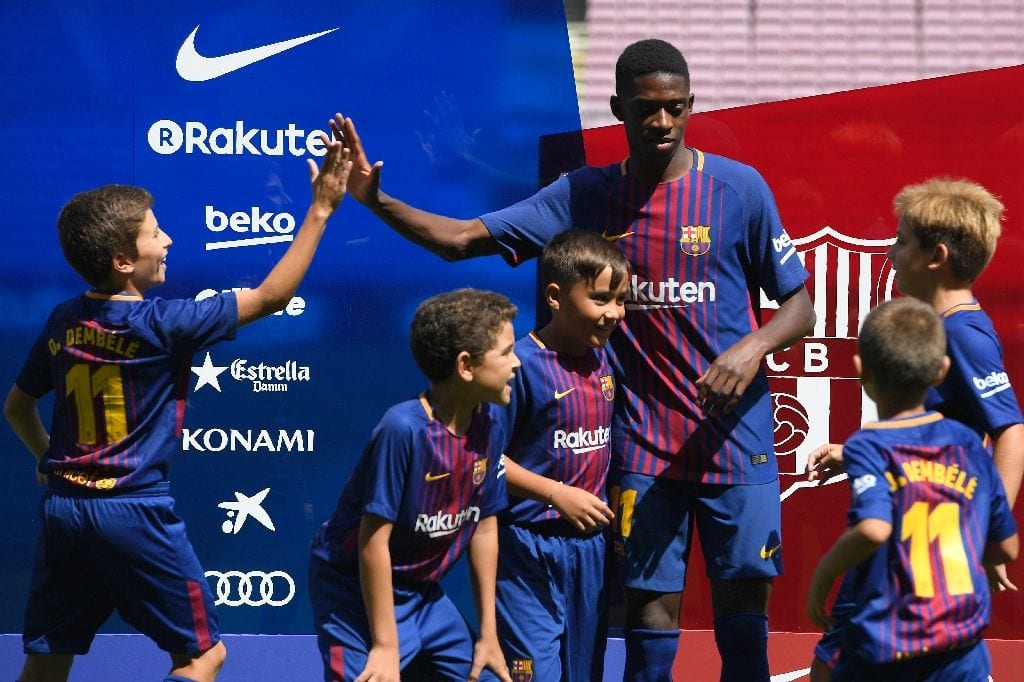 The most expensive player in Barcelona’s history will take to the field for the first time on Saturday as Ousmane Dembele debuts in a Catalan derby against Espanyol.

Atletico Madrid travel to a revitalised Valencia in the headline clash of the weekend, whilst there is an early start for champions Real Madrid.

Here, we look at five things to watch from the La Liga weekend.

Dembele a cure for FIFA virus?

The arrival of the 105-million-euro ($125 million) Frenchman is a much-needed tonic for Barca in the midst of continuing institutional chaos with ongoing public clashes between the board and leading players.

President Josep Maria Bartomeu claimed new contracts for Lionel Messi and Andres Iniesta, whose deals expire next summer, were a matter of time on Tuesday only for Iniesta to flatly deny that claim a day later.

On the field Barca need to ensure they don’t suffer their habitual hangover from international breaks known locally as the “FIFA virus”.

This time last year Barca suffered a shock 2-1 home defeat to Alaves as Lionel Messi and Luis Suarez started on the bench following their international commitments.

With Messi and Suarez only arriving back in the Catalan capital on Thursday after two crucial World Cup qualifiers in South America, Espanyol will rarely have a better chance for a first win at the Camp Nou since 2009.

It has been a highly promising week for Atletico as inspirational coach Diego Simeone extended his contract till 2020, whilst the pitch was laid among finishing touches to the club’s new 68,000 capacity stadium.

Since Simeone took charge in 2011, Valencia have had 11 coaches. However, their latest hire in Marcelino finally appears to putting Los Che back on the right track.

Valencia took a point from a thrilling 2-2 draw away to Real Madrid before the international break and have since been further boosted by the arrivals of Goncalo Guedes and Andreas Pereira on loan from PSG and Manchester United.

Should Atletico emerge unscathed from the Mestalla not having lost ground on Real after three away games to start their season, a serious title challenge is realistic.

La Liga president Javier Tebas has continued his war against PSG’s free-spending since snatching Neymar away from Barcelona, accusing the Parisians and Manchester City of “peeing into the pool” in their disrespect for financial fair play.

Tebas’ concerns arise from his ambition for La Liga to rival the Premier League’s interest around the world and getting television rights deals to match.

With that in mind, kick-off times in Spain have become gradually earlier in recent years with an eye on Asian markets.

Real’s kick-off against Levante at 1300 local time (1100 GMT) on Saturday will go head-to-head with City’s blockbuster clash against Liverpool.

Overshadowed by the wealth and glamour of Real and Atletico, two of Madrid’s more modest sides Leganes and Getafe have fought out their own rivalry in the lower divisions.

However, they clash for the first time ever in the top flight on Friday night at Leganes’ 11,500 capacity Butarque with the hosts even having the chance to leapfrog Barcelona to the top of the table after two wins from their opening two games.

Exactly a year from the day he left, Lucas Perez returned to Deportivo la Coruna from Arsenal on the final day of the transfer window.

“Money doesn’t make me happy. I move for emotions, for the feelings that I have,” said Perez, claiming he had turned down more lucrative offers to force through a return to his native Galicia.

Perez scored 17 goals in the 2015/16 season before his move and will need to fire if Depor are to avoid another year of battling relegation, starting with the visit of Real Sociedad on Sunday.