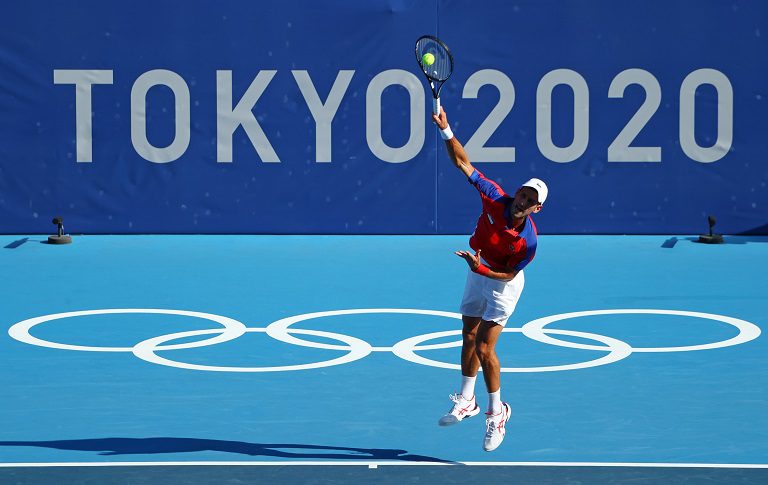 Novak Djokovic launched his bid to stay on course for a Golden Slam with a clinical 6-2 6-2 win over 139th-ranked Hugo Dellien of Bolivia on Saturday, as sweltering conditions in Tokyo took a toll on the players on the opening day of tennis at the Games.

Steffi Graf is the only player to have won all four Grand Slams and the Olympic gold in the same year but the 34-year-old Serbian is three fifths of the way there, needing a Tokyo gold and then the U.S. Open trophy to match the German’s 1988 feat.

The world number one would not have wanted to spend too much time on court in the heat and humidity and wrapped up proceedings on Centre Court on day one in about an hour.

With temperatures hovering around 33 degrees Celsius (91.4°F) with high humidity, players struggled to cope and did not find much comfort from ice bags and a tube blowing cool air.

“Very tough,” Djokovic, who will face German Jan-Lennard Struff in the secodn round, said about the conditions.

“I think today, from also speaking to other players, was the hottest day so far. It’s very hot but also humid. The hardcourts absorb the heat, it stays trapped in there. Not much wind, not much breeze. It was challenging definitely.

“But I’m pleased to overcome the first hurdle and I think I was solid on the court. I can always do better but first match, I’m satisfied.”

Anastasia Pavlyuchenkova lost only one game versus Italy’s Sara Errani but this year’s Roland Garros runner-up had spent enough time on Court Three under the blazing sun to feel dizzy and took a medical timeout in the second set.

Pavlyuchenkova, competing in Tokyo as a representative of the Russian Olympic Committee because the country was stripped of its flag and anthem for doping offences, felt faint and called for the trainer while leading 4-1 in the second set.

“I feel better but I have a massive headache now so that’s why I was trying to try to cool down after the match and rest, relax little bit,” she told reporters. “Just happy I got that one through.”

Her compatriot, Daniil Medvedev, said it was some of the worst heat he had played in after beating Kazakh Alexander Bublik 6-4 7-6(8) in the second match on Centre Court.

“But you have to play, it’s the Olympics,” world number two Medvedev said. “You go for the medal. You’re not here to cry about the heat. It was really tough for both of us.”

Poland’s Iga Swiatek, the 2020 French Open champion, had the chance to kick off proceedings on the main show court after Naomi Osaka’s match was moved back a day due to her involvement in Friday’s opening ceremony.

With media, volunteers and the players’ entourage the only ones present at the 20,000-seater stadium to witness her Olympic debut, Swiatek stayed calm and composed to secure a 6-2 6-2 win over German Mona Barthel, formerly ranked in the world’s top 25.

The 20-year-old got off to a fast start with a 5-0 lead and did not look back to set up a meeting with Spain’s Paula Badosa.

“I’m pretty happy that I’m into the second round and not only the humidity and temperature was hard but also the sun, because on one side it was pretty hard to serve,” said Swiatek, whose father Tomasz competed for Poland in rowing at the 1988 Seoul Olympics.

“We had to adjust quickly and change our ball toss. That was hard but the players who can adjust are going to be the best ones here.”

French Open champion Barbora Krejcikova did not spend much time on court as her Kazakh opponent Zarina Diyas retired with a left leg problem with the Czech leading 5-2. Krejcikova will meet Canadian teenager Leylah Fernandez next.

In men’s doubles, Britain’s Andy Murray and Joe Salisbury stunned second-seeded Nicolas Mahut and Pierre-Hugues Herbert 6-3 6-2 with the French pair looking to add the Olympic gold to their resume having won all four majors at least once.