‘Doping not a football problem’ as World Cup draw begins 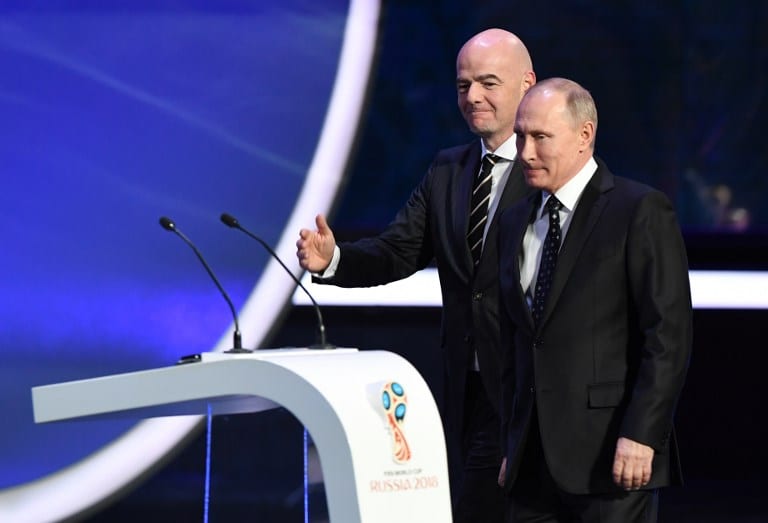 FIFA President Gianni Infantino denied Friday that doping was a problem in football shortly before the draw for the 2018 World Cup in Russia took place in the Kremlin.

President Vladimir Putin is expected to address the footballing world that has descended upon Moscow, in the midst of a freezing winter, to find out who will play who, when and where at the competition next year.

Putin and Russia will hope to make the draw itself a memorable occasion and turn the focus to football, and the setting, by Red Square and St Basil’s Cathedral, could scarcely be grander.

But with Russia’s participation at next year’s Winter Olympics in serious doubt over doping allegations, Infantino sought to distance football and the World Cup hosts from any suspicion.

Russia have been stripped of a third of the medals they won as hosts of the 2014 Winter Olympics in Sochi and last week a ban on the country taking part in international athletics was upheld by the sport’s governing body the IAAF.

But Infantino claimed that the level of testing in football is sufficient to show that the game is largely clean.

“I don’t think there are many other international sports organisations who are doing as many anti-doping tests as football is doing,” Infantino told a press conference.

“If you would have a serious doping issue in football this would be known by now, whether in Russia or any other country of the world.”

The build-up to the Russia World Cup has been overshadowed by talk of the controversial awarding of the tournament in the first place, of the friction between Putin’s regime and the West, and of fears over terrorism and hooliganism.

But now football’s biggest superstars, from Lionel Messi to Cristiano Ronaldo and Neymar, will find out who stands between them and World Cup glory as the draw takes place in the State Kremlin Palace.

The moment has come for Joachim Loew’s Germany side to discover who they will meet as they look to become the first nation to successfully defend the title since Brazil in 1962.

Messi and Ronaldo, the two players who have dominated the game’s biggest individual accolades over the last decade, will hope to avoid tough draws for Argentina and Portugal respectively in what will surely be those players’ final opportunity to lift the trophy.

Germany, Brazil and Argentina are all in the first pot along with France, European champions Portugal, Belgium, Poland and the hosts.

But if those nations are certain of avoiding each other, danger lurks in pot two, where the Spanish – the 2010 winners rebuilt into a formidable force by Julen Lopetegui – lie along with England.

“Whatever happens we will accept it gladly and sportingly. I don’t waste energy thinking about who I prefer and who I don’t,” said Lopetegui, but Spain and England will be crossing their fingers in the hope of being paired with Poland or the Russians.

FIFA will keep apart sides from the same continent with the exception of Europe, which has 14 representatives to go into eight groups.

Most sections will therefore contain two European nations, raising the prospect of England or Spain meeting Germany or France in heavyweight contests right away.

France and Spain were even drawn together during one practice run of the draw, while alternatively, there is the possibility of England being drawn with Iceland, who humiliated them at Euro 2016.

“Before the draw, there is nothing you can do. You just wait. You need some luck to win the World Cup and it begins here with the draw,” added former France coach Laurent Blanc, who won the World Cup as a player in 1998.

Blanc is in Moscow to act as an assistant, along with fellow former trophy winners such as Gordon Banks, Fabio Cannavaro, Carles Puyol and a certain Diego Maradona.

Germany’s Miroslav Klose, the leading scorer in tournament history, will bring out the trophy, while former England striker-turned TV presenter Gary Lineker will conduct the ceremony along with the Russian journalist Maria Komandnaya.

Looking forward to the occasion more than most will be Iceland, the Euro 2016 quarter-finalists making their World Cup debut, and Central American outsiders Panama.

Peru and Egypt make long-awaited returns too, and those nations will add something new to a tournament that will be deprived, among others, of four-time winners Italy, the Netherlands and the United States.