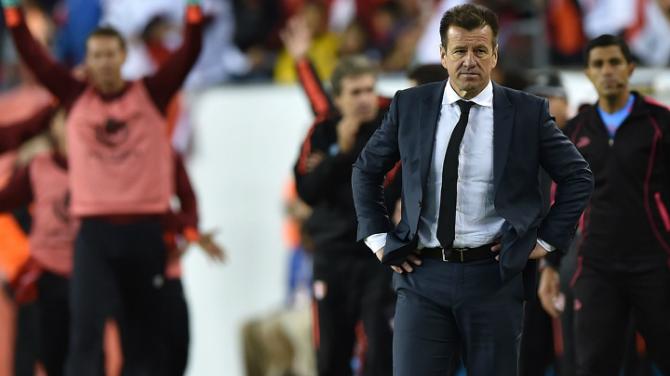 Defiant Brazil manager Dunga brushed off suggestions that early elimination from the Copa America would cost him his job on Sunday, telling reporters that he feared “only death” and not unemployment.

There was immediate speculation over Dunga’s future after Peru’s contentious 1-0 win eliminated Brazil in the group stage but the former World Cup-winning captain expects to be leading Brazil at their home Olympics in Rio de Janeiro in August.

Raul Ruidiaz broke the deadlock with 15 minutes remaining but replays showed the substitute had used his hand to bundle Andy Polo’s cross over the line.

Referee Andres Cunha spent three minutes deliberating over the decision with his linesman and other officials, before allowing the goal to stand.

The Selecao only needed a point to advance to the quarter-finals atop Group C, but were unable to capitalise on their many chances.

It’s the first time Brazil have failed to progress out of their group at the tournament since 1987, while Peru return to the knockout stages for the seventh consecutive time.

“I am only afraid of death, I am not afraid of that,” he said when asked if he feared losing his job after Brazil’s early exit from the centenary Copa America being hosted by the United States.

“The president knows what we are doing, how we are working, we know about the pressure, and we know that the job comes with criticism,” Dunga told reporters after the game in Boston.

“When you work for the Brazil national team you have to know the criticism will mount when you don’t get results but internally we know what we are doing.”

Dunga bemoaned the impatience of his critics at home and repeated his mantra that restructuring the game in Brazil would take time after a painful 2014 World Cup campaign.

The former Internacional, Fiorentina and Stuttgart midfielder was given the task of reviving Brazilian soccer after their humiliating 7-1 defeat by Germany in the semi-finals of the tournament they hosted two years ago.

However, after a bright start to his second spell in charge, Brazil were knocked out of last year’s Copa America at the quarter-final stage and currently sit sixth in South America’s 10-team qualifying group for the 2018 World Cup.

He has also failed to make many friends with his combative approach and the knives are being sharpened after the eight-times Copa America champions failed to make the second round for the first time in 29 years.

Dunga, though, blamed the defeat on the officials who failed to see that Peru’s goal was punched into the net and appealed for time to revamp the national side, which is widely held to be one of the weakest Brazil teams for decades.

“We lauded Germany for 14 years of work (in restructuring their football),” he said.

“When you don’t get results people are less tolerant. For a long time Brazil won a lot until 1970. And then from 1994 until 2002 we won a lot and so we Brazilians got used to winning. Now we are in a period of transition and we have to be patient.