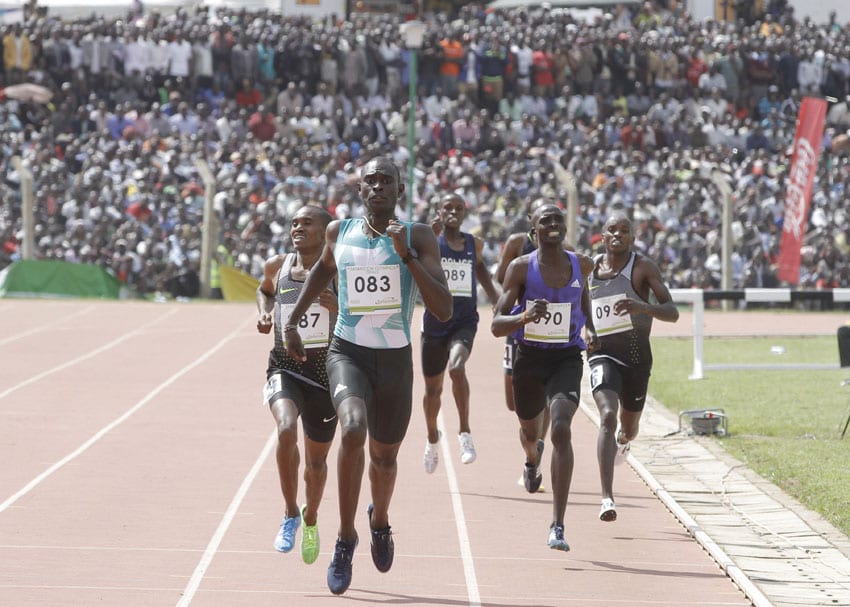 Eldoret left no doubt that it is the ‘City of Champions’ as tens of thousands turned out to witness the first day of the AK/Nock Rio 2016 Olympics Trials on Thursday at the Dr. Kipchoge Keino Stadium.

The facility that is designed for 5000 was almost bursting at its seams where the only available ‘personal space’ was at the VIP dais, media tribune, technical officials’ area, doping control and recording room.

Crowds who have always followed their beloved athletes on television when competing to make their country proud made a resounding statement that organisers hit the jackpot when deciding to move the event to the biggest town in northern Kenya.

Further, the watching Uasin Gishu County chief, Governor Jackson Mandago, was given a telling reminder that the facility whose land is said to be 80 acres needs to be developed into a world class closed stadium.

Conservative estimates put the mammoth gathering at anything between 20,000 to 40,000 that was almost 10 times the designated capacity but fears of a stampede were allayed by the well-behaved fans who filed patiently to access the stadium.

Long queues started forming as early as 8am and by the time Caleb Mwangangi won the last race of the day that started at 3:30pm local time (+3GMT), some had not gained entry.

With President Uhuru Kenyatta expected on Friday when Kenya’s team for Rio is named, fans were asked to turn up even earlier to avoid any inconveniences occasioned by the Head of State’s heavy security detail.

“It was great to run so well in front of my relatives and friends here at home. It was motivating to win here before them. The crowd was fantastic and I wish they would be bringing the Trials here every year,” four-time world champion, Vivian Cheruiyot said after zooming to victory in the women 10000m.

Royal Media Services (RMS) made their presence felt with live broadcast on Changei FM, as fans of the station of choice in the region thrilled in the presence of their celebrated presenters, Michael Bowen and Caro Kones.

Citizen TV celebrated sports anchors, Mike Okinyi and Waihiga Mwaura as well as Radio Citizen’s seasoned sports reporter and presenter, Philip Muchiri were on hand to give live links with the latter also keeping Inooro TV and Inooro FM viewers and listeners updated on the action.

“Tomorrow we are going all live since all the events are finals. The crowd here was fantastic,” Okinyi told.

Citizen Digital was among the first globally to publish detailed race reports with regular minute by minutes updates on social media by the RMS team to round the package.

Olympic medallist, Sally Kipyego, Edwin Soi and Thomas Longosiwa were the biggest casualties on Day One as the Trials lived up to their unforgiving nature.

Kipyego who won women 10000m silver could only muster a sixth finish in her event where four-time world champion, Vivian Cheruiyot and Betsy Saina sealed the 1-2 to make the team.

Longosiwa and Soi who won bronze at the London 2012 and London 2008 Beijing Games will wait for selectors later Friday to learn whether they have clinched the wildcard after following each other home in fourth and fifth in the men 5000m Trial.

On the other end, Caleb Mwangangi, Saina and African champion, Alice Aprot who got a wildcard will compete at their first Olympics with the women 10000m runner-up excited at her achievement.

“I think they should be doing it in Eldoret all the time, look at the crowd, it’s never like that in Nairobi. It’s a pleasure and we thank everyone who put this together and everything is possible. I’m sure the fans are all happy to see us,” the overjoyed Saina who celebrated her 28th birthday in the best possible manner enthused.