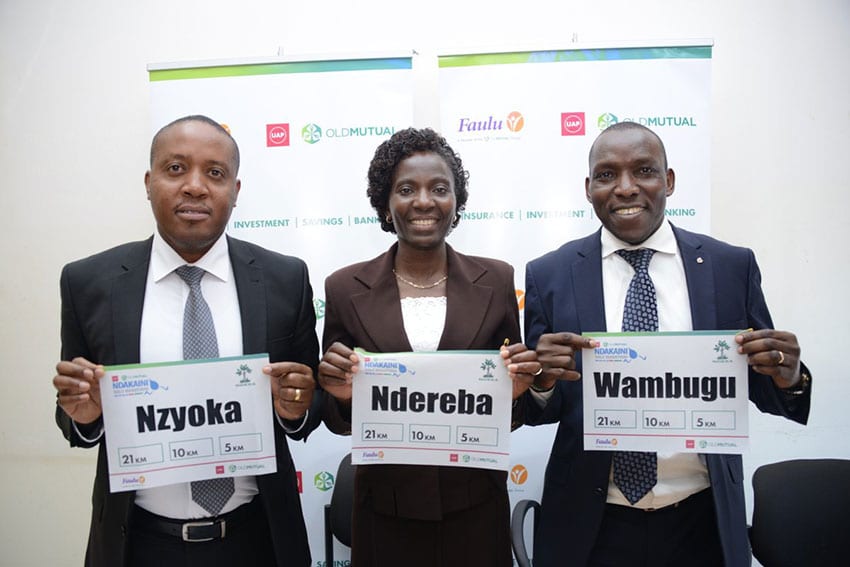 Elite athletes will have a designated starting point for the first time at the 2016 UAP Ndakaini Half Marathon as organisers seek to meet Association of International Marathons and Distance Races as well as world body IAAF standards.

Also being introduced this year are personalized running bibs and Radio Frequency Identification chips for invited top runners in the men and women 21km main races.

“This time we want to improve the experience of the elite runners so they will start 50m ahead of the rest of the pack.

“We have also made special arrangements for them so when they register they will be given bibs with their names as it is with other marathons around the world,” UAP Group Managing Director General Insurance, James Wambugu told Citizen Digital.

“Organisers want to fulfil international standards and after going past the decade mark, we introduced the electronic timing and it worked perfectly,” he added.

He was speaking in Nairobi during the launch of the 13th running of the event slated for September 10 with organisers targeting 7000 entries up from 2015’s 4000.

Former women’s world marathon record holder, Catherine Ndereba, lauded the initiative and is optimistic that the event can churn out future world champions.

“The last event had a lot of talent and I tried to mentor some of the athletes that showed potential.

“I would give them tips on how to approach the race, when to speed up, when to conserve their energy and I hope my advice will serve them well in the future,” the two-time world champion added.

“The process can be however, be over whelming as you can only take a select few under your wing despite the fact that you would have wished to dedicate your time to all the talent that’s out there, it’s almost impossible,” the Athens 2004 and Beijing 2008 silver medallist rued.

Stringent measures have been put in place to have robust doping control in conjunction with Athletics Kenya at this year’s race.

“This will not be the first time we will be testing for doping; we have made arrangements with AK and the national government to make sure the appropriate testing will be done and we have made the initial payments to ensure this happens so we can have clean winners,” Wambugu explained.

Other events on the programme are the 10km and 5km races for adults, corporate teams and children.

The registration fee will be Ksh1000 for individual athletes and Ksh50,000 for corporate teams while a discounted rate of Ksh800 shillings applies for those who register online.

Kisorio, Team Kenya’s captain to the 2011 Punta Umbria World Cross, ran 65:15 for victory while Korikwiang clocked 71:35 to conquer the hilly course set around the Ndakaini Dam in the women’s showdown.