Embu off to a flying start at WASCO Games 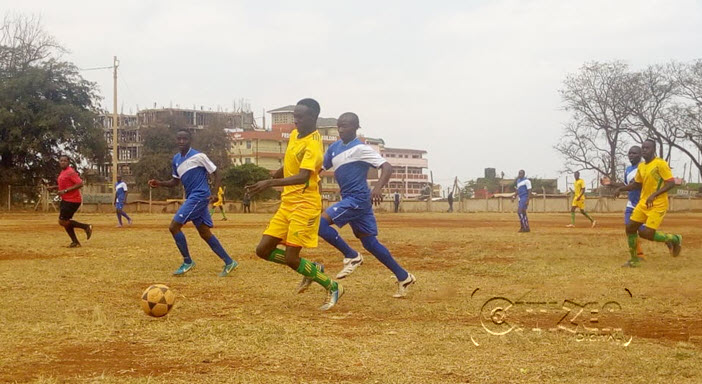 The host scored in both halves, winger Dennis Mwiathi scoring the first goal in the 36th minute with attacking midfielder Eric Mutugi adding the second goal three minutes after halftime.

Having the twelfth player on the pitch, the home team started the match offensively but their striker Victor Nyaga was caught offside on two occasions in the seventh and eleventh minutes.

Kiambu’s Dan Mwiruri got a chance in the 18th minute but his free-kick at the edge of the box went wide.

The visitors got a setback after Zedrian Angwenyi picked a knee injury paving way for Antony Gichuki in the 27th minute.

In the 34th minute, Embu’s Victor Nyaga got a through pass from Simon Njue only to be denied by Kiambu goalkeeper Ben Kairu.

Embu winger Dennis Mwiathi side stepped Kiambu’s defence cutting back the goalkeeper to score the first goal for the host in the 36 minutes.

The match ended 1-0 in favor of Embu at the half time.

Embu head coach Nicodemus Omasete brought in Victor Gitonga for Simon Njue at the start of the second half which immediately brought in some change allowing goal scorer Mwiathi to give a through pass to Eric Mutugi to score Embu’s second goal in the 48th minutes.

Kiambu Dan Mwiururi who was outstanding for his side missed yet another chance to pull one back for his team after he was denied by the post in the 67th minute.

“My team played according to our game plan. I’m happy with my boys despite missing a lot of chances which would have given us a huge goal difference,” said Omasete.

On his part, Kiambu head coach Antony Muchiri blamed his team’s poor preparations adding that they’ll change their tactics in their next fixture.

“We had only two weeks to train so I have not yet got the right combination but after losing against the host we’ll go back to the drawing board and come up with another game plan in our next fixture,” explained Muchiri.