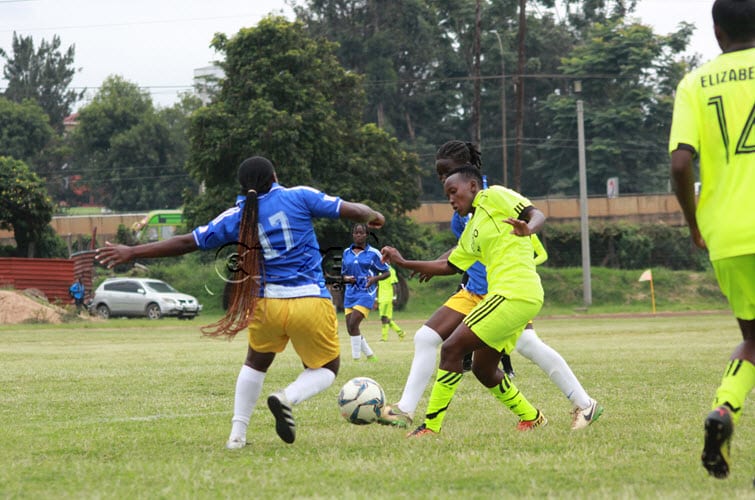 Mathare United Women has become the first team to be relegated from the Kenyan Women Premier League (KWPL) league in the 2021 season.

Mathare, formed in the year 2001, they won the 2011 Safaricom Sakata Ball Challenge but their quick ascendancy to the top was brought down to earth after falling 5-1 at the hands of Gaspo Women at the Stima Members Club, Nairobi on Sunday.

The ‘Slum Girls’ went into the game placed eight in the log, seven points adrift from the safety zone and they failed to secure a draw which could have been enough to save them from the relegation axe.

The loss left Ann Aluoch coached side went into the match placed rock bottom on eighth with four points, seven behind Zetech whom are placed fifth  while Gaspo are third on 24 points.

Sakwa’s girls went down 3-0 at the hands of Zone B leaders Thika Queens at the Stima Members Club, results which left them in the fifth position with 13 points but he believes they need to up their game knowing that they needed a win to be in contention of playoffs spot.

“Yes we lost 3-0 against Thika but I can say my girls really played well, they coordinated well in all departments but luck was not on our side. Our previous matches were pathetic but I have worked hard to bring confidence among my girls, ” she explained.  “The league is now very competitive, because fourth fifth and sixth teams in the log have a difference of one point each and this means a win will boost the team while a loss will see them lag behind. I understand three teams amount eight in each zones, (A and B) shall be relegated and I am working hard not to be among them.”

Beginning next term the competition will be unified meaning six teams will be relegated while other two from the lower division will earn promotion to make for 12 participating teams hence making the league more competitive.

In the match against Thika, Mwanahalima Adam scored a brace in the 72nd and 81 minute after Catharine Githae had notched the opening goal in the 66 minute.

Sakwa now hopes to defeat Makolanders in the coming weekend fixture at the Stima Members Club in Nairobi so as to have a good chance of featuring in the premier league next season.

At the same grounds, Kibera Soccer Ladies secured a 3-0 win against Zetech Sparks to end their three winless streak.

The goals were notched by Cynthia Atieno, Faith Oketch and Lorna Nyabuto. The win left Kibera in sixth position with 12 points from 12 matches, one behind fifth placed Zetech.

In the Zone B league, Trans Nzoia Falcons, playing at the Moi Kisumu Stadium came from behind to register a 3-3 draw against Kisumu All Starlets.

The draw took Falcons to 17 points, one behind fourth placed Kisumu All Starlets.

Other matches witnessed defending champions Vihiga Queens taking their unbeaten run to 13 matches after beating Nakuru Queens 3-2 at the Mumias Sports Complex. Jentrix Shikangwa, Topister Situma and Tereza Rngesha were on target for the Alex Alumira coached side while the two consolation goals from Nakuru Queens were scored by Diana Koske and Stella Odhiambo.

Elsewhere Wadadia FC earned easy points after their hosts Eldoret Falcons failed to honour the fixture at the Eldoret showground, and  the third time for them failing to honour a fixture.