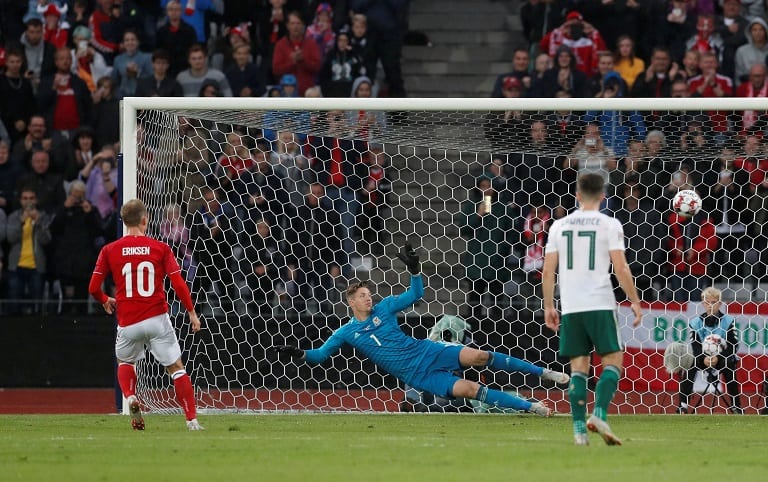 Christian Eriksen scored twice to lead Denmark to a 2-0 win over Wales in their Nations League opener on Sunday, ending a week of turmoil for the national team on a high note.

The Danish FA (DBU) was forced to field a scratch side made up of third-tier and futsal players for Wednesday’s friendly against Slovakia following a contract dispute over image rights with the regular internationals who helped Denmark reach the last 16 in this year’s World Cup.

The parties reached a short-term agreement on Thursday to allow the players to return and they were greeted with loud cheers as they walked on to the pitch in Aarhus, despite being labelled greedy by many supporters during the week.
“DBU and the players seem to have forgotten the national team is bigger than both of them and have ended up alienating us regular Danes. They need to find a true compromise and make it about what happens on the pitch,” said 23-year-old student Johannes.

The Welsh fans chanted “you’re only here for the money” but that did not faze the Danes as Eriksen scored the opening goal after half an hour with a low shot into the bottom left corner of the net.

Denmark coach Age Hareide also returned to the sidelines after missing the 3-0 loss in Slovakia and Pione Sisto had the opportunity to extend the hosts’ lead, but Wales goalkeeper Wayne Hennessey made a good save.

Eriksen added the second with a 63rd-minute penalty following a handball by Wales defender Ethan Ampadu.

Welsh captain Gareth Bale went close to pulling a goal back in the 83rd minute when his deflected shot forced Denmark keeper Kasper Schmeichel into an acrobatic save.

Wales manager Ryan Giggs was disappointed with the first goal his team conceded.

“When you don’t get the press right and Eriksen is free on the box – which we’ve talked about beforehand – you’re in trouble,” he told reporters.

Hareide also praised his main playmaker and thought his rested players had more energy than their opponents.

“We’ve seen so many teams try to lock him (Eriksen) down but they lose him when he comes around the box and that is his big advantage as a footballer,” he said.

“There is no doubt that our legs were fresher than the Welshmen.”