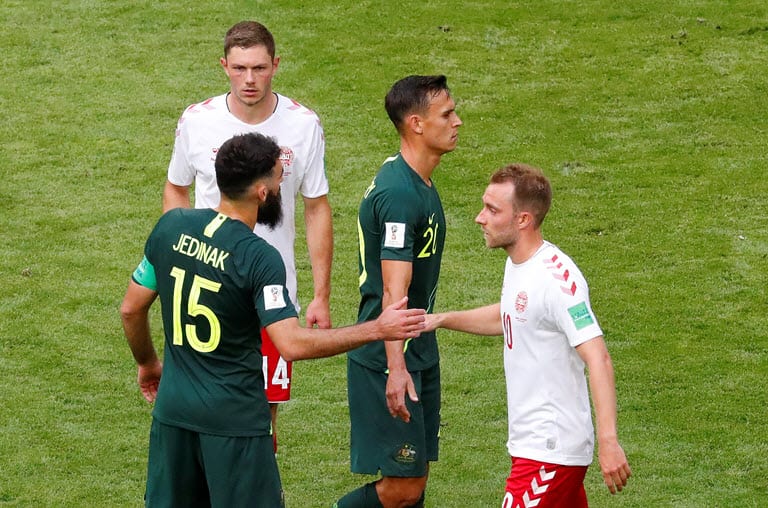 Christian Eriksen’s superb opener was cancelled out by Mile Jedinak’s penalty as Denmark and Australia drew 1-1 at the World Cup on Thursday to ensure Group C would go down to the final round of matches.

Denmark moved on to four points and need at least a draw against France in their last game to guarantee a last-16 spot.

Australia, with one point, are clinging on by their fingertips and need to win their final match against Peru to stand any chance of going through.

Denmark’s seventh-minute opener was fully deserved and the quality of the finish was superb in a World Cup that has produced some wonderful goals.

Aaron Mooy’s poor clearance was immediately returned into the area. Nicolai Jorgensen controlled and flicked the ball inside to Eriksen, who ghosted into space and lashed a sweet half-volley on the rise which flew high into the net.

The sublime finish was Eriksen’s 13th goal in his last 15 appearances for Denmark and underlined the pivotal importance of the Tottenham Hotspur playmaker to the otherwise workmanlike Danes.

Denmark should have doubled their advantage when Jorgensen flashed a header wide at the near post as Australia looked ragged at the back and toothless up front.

Yet just as in their opening game, Australia were handed a route back into the match from the penalty spot, thanks to the intervention of the Video Assistant Referee.

Referee Antonio Mateu Lahoz had failed to spot that Mathew Leckie’s header had struck the arm of Yussuf Poulsen, but after being alerted to the incident by the VAR, he pointed to the spot.

Danish keeper Kasper Schmeichel had not conceded for 571 minutes, but Jedinak calmly rolled home his penalty in the 38th minute to equalise.

Having clawed their way back into the game, Australia seemed imbued with a renewed sense of belief, surging forward in numbers whenever they could and roared on by the vast array of green and gold clad fans in the Samara Arena.

They could not turn that impetus, however, into clear chances.

After Denmark’s Pione Sisto put a good opportunity wide, Australia gradually got on top, but the nearest they came to grabbing a winner was when Leckie’s cross was turned over his own goal by Henrik Dalsgaard and Mooy blasted over from distance.

Second-half substitute Daniel Arzani brought an additional spark to the Australia attack and had a good shot parried by Schmeichel at the death while Leckie tested the Danish keeper with a hooked effort.