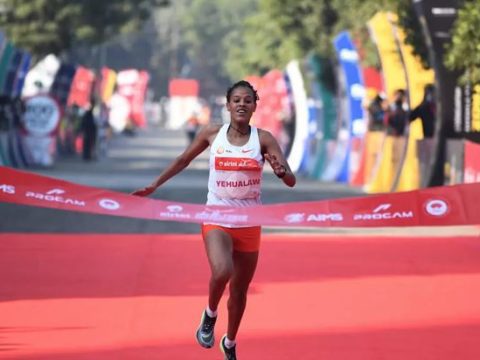 Yehualaw, 22, clocked 63 minutes and 43 seconds which cut 19 seconds off the previous mark set by Kenyan Ruth Chepngetich earlier this year.

The Ethiopian was under world record pace all the way.

Her compatriot Jemal Yimer won the men’s event in 60:29 as he edged out another Ethiopian Tesfahun Akalnew.

Yimer had one second to spare from Akalnew with Kenyan Shadrack Kimining a further second back as he completed an all-African top three.

The men’s winning time was outside the 60:21 course record set by Sir Mo Farah when he won last year’s inaugural event.

However, all the headlines from the Northern Ireland event will go to the new women’s world record holder Yehualaw, who benefited from excellent work from her male pacemakers.

Her time cut 57 second off her personal best set in Istanbul earlier this year when Chepngetich set the then world record.

Yehualaw’s opening 5km of 15:05 had her eight seconds inside world record pace and she remained six seconds ahead of schedule as she reached the 15km mark in 45:24.

The Ethiopian went on to produce an amazingly fast closing six kilometres – helped by a downhill section in the final two kilometres – as she obliterated Chepngetich’s previous mark.