Euro 2020: ‘England rode their luck, but Southgate captured the mood’ 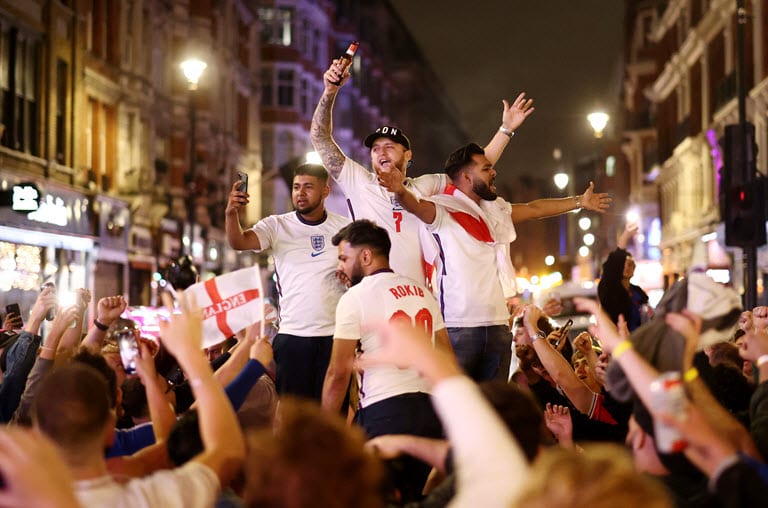 England manager Gareth Southgate was the model of restraint and calm until he reached the vast bank of supporters gathered at one end of Wembley belting out their new anthem Sweet Caroline with glorious, noisy abandon.

The wait was over. The sweet release of 55 years of England’s men’s football teams coming up short was pouring out in a frenzied, celebratory cacophony after the nerve-shredding tension then joy of the Euro 2020 semi-final win over Denmark after extra time.

Southgate, whose first move in victory was the typically classy and modest consolation of opposite number Kasper Hjulmand, let rip with a volley of fist pumps and clenches towards the night skies that drew a deafening response from the biggest crowd Wembley had seen since lockdown and those soulless lockdown days of empty stadiums.

Not for the first time, Southgate had captured the national mood perfectly.

When Dutch referee Danny Makkelie sounded the final whistle that confirmed England’s place in their first major final since the World Cup win against West Germany in 1966, the stadium exploded in a wall of sound.

And the soundtrack for the finale was inevitably Three Lions – the much-sung, but often misunderstood lament, to England’s years of disappointment penned before Euro 96 that has often been mistaken for arrogance.

“Football’s coming home” bounced off the walls of Wembley at deafening decibel levels. It is not coming home yet but England will be back in their own house against Italy on Sunday with the best chance since 1966 of making it happen.

And the extent of what it meant could be seen before, during and after a game that was the perfect occasion as fans returned in their thousands, with attendances finally edging towards capacity after the months of lockdown.

Even before the game, there was an electricity this newer version of the national stadium has not experienced or produced.

It may have been the added excitement of so many England fans being able to watch their heroes in the flesh again after so long but there was a buzz and noise an hour before kick-off that never let up until long after final whistle, and the songs of celebration had been replaced by the hum of lawn-mowers in readiness for Sunday’s final.

From late afternoon to kick-off time, anticipation, expectation and excitement were almost tangible in and around the stadium.

The sun shone. The songs rang out. All it needed was the victory that had agonisingly escaped England’s grasp for so long.

Those of us who have spent many years following the falls and fortunes of England teams at home and abroad dredged the memory bank to recall anything similar in recent memory for an international match here without success.

Neil Diamond’s unlikely singalong has assumed such a status among England fans it was the last song played before the emergence of the teams and the roars barely dimmed, even when Southgate’s side fell behind.

Sport always has the capacity to lift the spirits and the return of fans, the inspiration and atmosphere they create, has not been better illustrated than on this highly charged and ultimately triumphant night.

As England’s players and their animated (for Southgate at least) manager made their way around a lap of appreciation, there was an unmistakeable bond between supporters and team that started to be forged with that surprise run to the World Cup semi-finals in 2018.

England’s entire squad, along with backroom and support staff, sang in unison with fans who were high on the emotion of victory, one the country had waited so long for, one many always thought might remain tantalisingly out of reach.

These were scenes being replicated by thousands around the country way beyond Wembley and the streets outside, where the choruses of joy could still be heard long after the final whistle.

Denmark complained bitterly that Raheem Sterling had done down far too easily under the challenge of Joakin Maehle, and Harry Kane – normally that most reliable of penalty takers – had a huge reprieve when an awful spot-kick was saved by the brilliant Kasper Schmeichel.

The rebound fell invitingly at Kane’s feet for arguably the most important England goal since Sir Geoff Hurst made sure it was indeed all over in the 4-2 win over West Germany in the World Cup final.

England may feel they were due a bit of good fortune after the decades of disheartening disappointment.

Some fans could not even look as Kane stepped up, lifting their gaze from the shock of the missed penalty to see the captain fire in the goal that confirmed a place in the Euro 2020 final – that simple phrase alone sounding so sweet to the ears of everyone who has lived through this broken dream on so many occasions.

Who can blame those inside this cauldron and every supporter outside for drinking it in?

It has only happened twice, Southgate joining Sir Alf Ramsey as the only England manager to take them to a major final.

England’s manager has history with Euro semi-finals at Wembley but now he can finally, finally, move on from his missed penalty in the shoot-out against Germany in 1996. He has created new, more glorious memories to expunge that moment of misery with the power to add even more on Sunday.

Southgate has had his doubters but this is most spectacular confirmation. He has followed up a World Cup semi-final with a Euro 2020 final. Untold riches for England in the modern era.