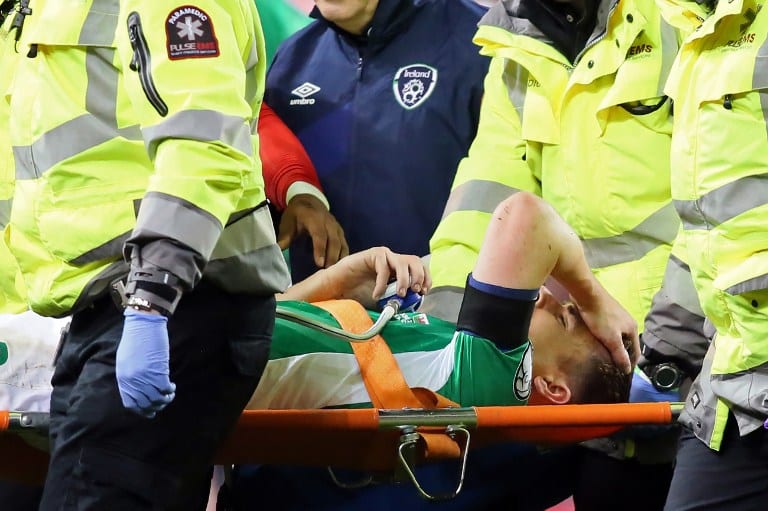 Everton captain Phil Jagielka said Tuesday his side will be especially fired-up to win this weekend’s Merseyside derby against Liverpool after a horrific injury suffered by team-mate Seamus Coleman on international duty.

Republic of Ireland defender Coleman is set to be sidelined for months after undergoing an operation on leg bones broken as a result of a tackle by Neil Taylor of Wales, who was sent off for the challenge, in last week’s goalless World Cup qualifier in Dublin

Jagielka hopes to speak to Coleman ahead of Saturday’s short trip to Liverpool’s Anfield ground – a venue where Everton have not won since 1999.

Just three days after the derby clash, Everton face Manchester United at Old Trafford and Jagielka told everton.tv on Tuesday: “We’ll all be thinking about him and, come Saturday and Tuesday, I’m sure he’ll have the TV on and be cheering us on.

“There’ll be no incentive needed, but the circumstances over the last few days might add a bit of a motivational edge on our behalf.

“We want to go out there and play well and it will be nice if we can all get to speak to Seamus beforehand.”

Right-back Coleman has started 26 of Everton’s 29 Premier League matches so far this season and fellow defender Jagielka added: “Seamus is a massive part of the furniture. He’s been here a long time now, he’s one of the leaders.

“All we can do is be there for him. He’s had the operation, it’s been a success and he’s on the slow road to recovery.

“As a club, a family, we have wished him a speedy recovery and we will be with him every step of the way. He’s a great lad and hopefully we can get him smiling around the club as soon as possible.

“He’ll be down at the moment because it’s not long since it happened.

“His friends and family away from football will help him through these initial stages.

“When he is able to do things it’s up to us as a club – the players, physios, coaches.

“I’m sure we’ll be able to get him to where he needs to get to.”