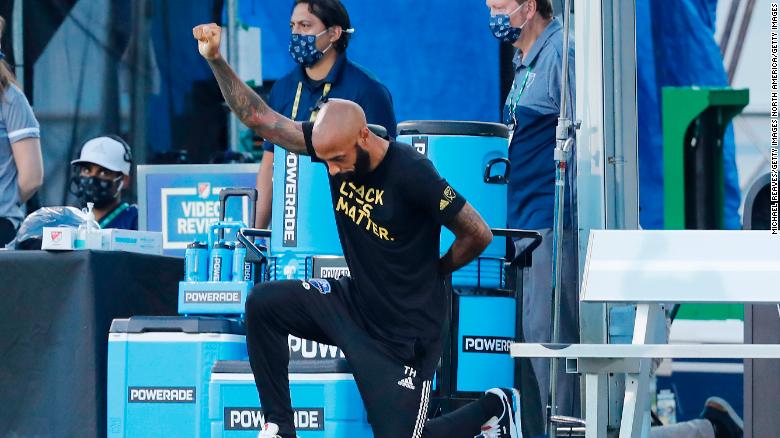 Editor’s Note: On April 30, 2021, CNN published this interview with Thierry Henry, in which he speaks exclusively about his growing campaign against harassment on social media in the UK and elsewhere. As part of this movement, a boycott of social platforms began on Friday at 3pm UK time and some UK media organizations chose to participate. After careful consideration and debate, CNN Sport decided not to go silent on social media this weekend. It is CNN’s belief that as a global news platform, its unique voice can be used to report on this campaign and ones like it, and the serious, important issues they highlight. CNN is committed to reporting on issues of racism and online harassment wherever they occur in the world. This story is part of that coverage, and we will be using our social platforms to highlight this reporting and developments in this story over the weekend.

It has been five weeks since Thierry Henry deleted his social media accounts and the former Arsenal forward has been through a range of emotions.

He made the decision at the end of March following a spate of online racist abuse aimed at Black footballers and what he said was the inability of social media companies to hold users accountable for their actions.

“At the very beginning, you know, I was kind of in a weird mood, shall I say, we talked a lot throughout those moments and I was like: ‘People are not realizing what’s at stake here and the problem that we have in this society right now.’

“Maybe if I come off social media, as you know, taking a stand for the people that don’t maybe have a voice, maybe you can create a wave because of me coming off social media. People would like to know why, and they wanted to know why. But in the aftermath of it, there was a little period where I was like: ‘Well, it’s kind of a shame that people are not reacting.'”

Despite both Twitter and Instagram — which is owned by Facebook — recently announcing measures to try and combat the issue, the online racist abuse of Black footballers has continued.

When Henry first made the decision to delete his social media accounts, the 43-year-old told CNN he hoped to inspire others to take a stand against online racist abuse and bullying. Five weeks later, his actions have certainly had the desired effect.

Starting at 3 p.m. BST on Friday, April 30, clubs in the Premier League, English Football League, Women’s Super League and Women’s Championship, along with the game’s governing bodies and organizations such as Kick It Out, will take part in a three-day social media blackout.

Some of the UK’s largest media broadcasters, such as Sky Sports and BT Sport, will also take part in the blackout, which will end 11:59 p.m. BST on Monday, May 3.

“If it [coming off social media] can make a little impact and have an impact … for that, you need the strength of the pack,” Henry says.

“So when I saw that it did happen recently, I was actually happy about it, but I was thinking about all those people that have been waiting for that for a very long time. It is a great tool, as we talked about, but people use it as a weapon sometimes.

“I like the fact that people actually realize that when we come together, it’s … powerful. I realized that maybe me coming of it might create a little wave in the media and it did, and making people answer some questions. So now, when I saw what’s been happening and what’s going to happen at the weekend. I was like: ‘OK, OK, it’s a start, it’s a start.’

“A lot of people are — I’m not saying waking up because everyone was aware of it — but now they’re loud about it and the same energy that they put with the Super League. It looks like we’re getting brave into trying to make those big companies answer to the questions that we have, and I know it’s not easy also on their side, but that’s your job.”

Since the boycott was announced, both Twitter and Facebook have reiterated their desire to remove abuse of all kinds from their platforms.

“We don’t want discriminatory abuse on Instagram or Facebook,” a Facebook spokesperson told CNN. “We share the goal of tackling it and holding people who share it accountable. We do this by taking action on content and accounts that break our rules and cooperating with law enforcement when we receive a valid legal request.

“We’re committed to fighting hate and racism on our platform, but we also know these problems are bigger than us, so we look forward to continuing our work with industry partners to tackle the issue — both on and offline.”

When asked by CNN about Henry’s continued absence from their platform, a Twitter spokesperson told CNN: “Racist behavior, abuse and harassment have absolutely no place on our service and alongside our partners in football, we condemn racism in all its forms.

“We are resolute in our commitment to ensure the football conversation on our service is safe for fans, players and everyone involved in the game.

“Racism is a deep societal and complex issue and everyone has a role to play. We are committed to doing our part and continue to work closely with valued partners in football, government and police, along with the working group convened by Kick It Out to identify ways to tackle this issue collectively — both online and away from social media.”

According to Twitter, it has attempted to contact Henry and would welcome the opportunity to speak with him. CNN understands that Instagram have been in ongoing contact with Henry’s representative, prior to him leaving social media and since.

Henry tells CNN that he has not spoken directly with anyone at Instagram, but says the social media company has been in touch with his representatives.

Henry declined the opportunity to meet with someone at Instagram, as he has always maintained the priority for social media companies is to take action to end the abuse.

“Like I said to you, we have so many, so many discussions,” he says. “I just want action. That is it. What are we going to talk about? Telling me what [statement] you just put out recently? What’s it going to be: a discussion, by the way, or are you just going to tell me what was going to happen.”

Henry says the blackout is a welcome move but warns against complacency. He understands it will continue to be an uphill battle and admits he may never see it come to fruition, but is unwavering in his commitment to the fight.

“[What] the world of English football is doing it at the minute and what’s going to happen at the weekend, people ask me: ‘Is it enough, the weekend?’ And I’m like: ‘It’s a start.’ You know, you can’t be too greedy from not having anything to that,” he says. “It’s a start. But yes, we have a voice, we have a voice altogether.

“We can actually make people aware of our disapproval and hope that things can change. If you don’t do anything, nothing would ever change. Like I always said, you know, if you try to do something, you might succeed or not, but you’re making people aware and along the way you will have an impact.

“Maybe not this year, maybe not in two years, maybe not in three years. Maybe we might not see it, but you have to do something while you are passing by.”