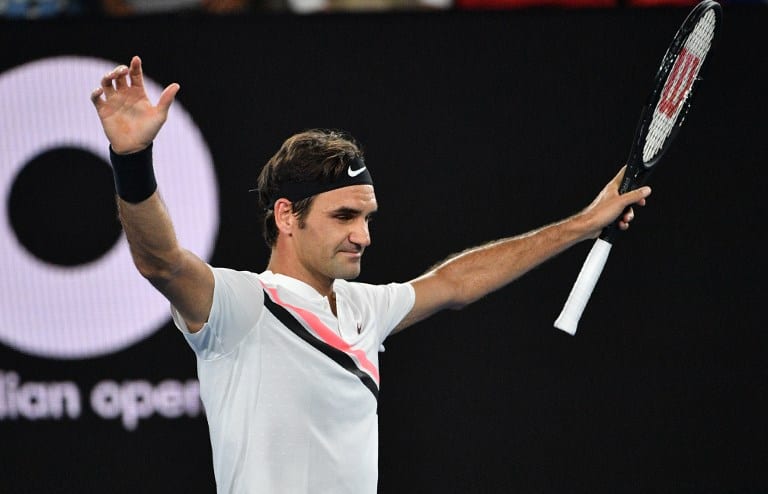 But with temperatures touching an energy-sapping 40 Celsius (104 Fahrenheit) and ice-towels in use, third seed Garbine Muguruza and 2014 winner Stan Wawrinka both wilted and were knocked out.

World number one Simona Halep was also convincing in her straight demolition of Canadian Eugenie Bouchard.

“I practice with him so I had the information I needed,” he said, adding that the heat doesn’t bother him.

“If you want to get to the top, you’ve got to play in all conditions.”

It was never going to be easy for the German. While Federer had made at least the third round each year since his Melbourne Park debut in 2000, Struff had failed to go further than the second round at any Grand Slam.

Six-time Melbourne champion Djokovic had a much tougher time, coming through a four-setter against Gael Monfils in a thorough examination after being out for six months with an elbow injury.

He lost the first set before Monfils began struggling in the second and was heard at one point telling the umpire: “I’m tired and dizzy.”

“It was tough conditions, brutal, especially the first 90 minutes,” he said.

“I’m still not 100 percent, but building. I have a lot of faith and self-belief.”

The heat took its toll on a host of players, including Wimbledon champion Muguruza, who suffered with heat-blistered feet.

“I maybe could have done things better, but at the end, she deserves to win,” she said.

Russian drawcard Sharapova was on Rod Laver Arena early and avoided the brunt of the weather as she showed why she should be again taken seriously in dismantling Sevastova 6-1, 7-6 (7/4).

It was the Latvian who ended her Grand Slam comeback in the last 16 of the US Open in 2017 as she returned from a drug ban. But not this time.

Sharapova, a five-time Grand Slam winner and the 2008 Australian champion, was unstoppable in racing through the first set before a battle in the second.

“You know, it was a warm day. I did my job in two sets against someone that’s been troubling in the past for me,” she said afterwards.

“I think I deserve to smile out there after that victory.”

Being unseeded means she has her work cut out to reach another final.

Next up is in-form 2016 Australian Open champion Angelique Kerber, who beat Donna Vekic in two easy sets as she starts to rediscover her best again after a miserable last year.

Eighth seed Caroline Garcia also stayed in the title hunt, but she found it hard going against Czech teen Marketa Vondrousova, who pushed her to three gruelling sets.

“My feet are burning,” she said. “But we know it’s like this in Australia — the next day it can be freezing.”

Among men into the third round was fifth seed Dominic Thiem, who came from two sets down to beat American qualifier Denis Kudla, and fourth seed Alexander Zverev.