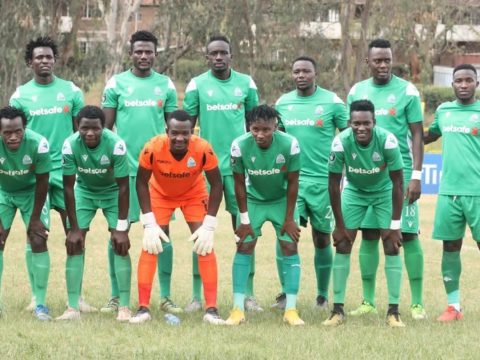 The global football governing body FIFA has cleared Gor Mahia of the transfer ban it had imposed on them for failing to pay its former players their dues upon the termination of their contracts.

In a letter addressed to the club, FIFA noted that the complainants had received their payments from the club hence the proceedings were closed and the ban lifted.

“We take note from the mentioned correspondence that the creditor has received the amounts due by the respondent, the club, Gor Mahia FC, in accordance with the decision passed by FIFA (in accordance with Article 13 rules governing procedures of players’ status committee and the Dispute Resolution Chamber).

Aduda had indicated that they had already identified potential players to beef their squad and were only waiting for a nod from FIFA.

Also in the list of complainants was the former tactician Steven Pollack who has also been cleared by the club. Among the potential Gor recruits is a Malian International shot-stopper Adama Keita who is reportedly already training with the club.

Long-serving goalkeeper Boniface Oluoch is still ineligible to play at the CAF Confederations Cup following a 4 match ban by CAF alongside a Ksh. 1.5 million fine imposed on him over the chaos that erupted in Zambia against NAPSA Stars early this year.

With three players having left, and with the goal drought witnessed last season, Gor will need to do much more on the attack as well as the defence ahead of their continental campaign.

In an earlier interview, assistant coach Sammy Omollo ‘Pamzo’ had hinted at poaching for lethal strikers saying despite having foreign goal poachers in the squad, Gor did not impress in their last League campaign.

‘’We will need more strikers and defenders. Our main undoing last season was the striking force. We did not score many goals as we expected,’’ said ‘Pamzo’.

The absence of Charles Momanyi who decamped to Tusker on mutual consent and Geoffrey Ochieng’s injury will call for a serious need of more defenders. Ugandan Fred Nkata remains the only left-back following the injury of regular starter Geoffrey Ochieng’.

The midfield will also need a beef-up after Kenyan international Kenneth Muguna left for Tanzania’s Azam at the end of last season. This is after the return of Francis Kahata to Gor hit a snag after K’Ogalo failed to meet his sign-on demand.