The Sports Disputes Tribunal (SDT) has the final word if the long overdue Football Kenya Federation elections will take place before the March 30 deadline set by Fifa, with new developments emerging every now and again – parties – mainly opposed to the ongoing electoral process seeking fresh prayers now and again leaving the whole thing in limbo.

Whichever ruling Ohaga and his team will make, will be closely monitored as some of the issues raised by parties enjoined in a case by the federation seeking to stop Sports Registrar Rose Wasike from barring elections on grounds of non-conformity with the 2013 Sports Act, already amount to contradicting the tribunal’s initial ruling.

If for example, Ohaga rules in favour of one Milton Nyakundi who is enjoined in the case arguing that FKF’s term limit expired on February 10, 2020, it will amount to  self-contradiction.

Nyakundi, a sports journalist, observes that,  “It will be interesting to know if Fifa gave an approval to extend FKF’s tenure beyond what is provided for in the FKF constitution or if the Sports Disputes Tribunal has the right to extend their term.”

In December 2019, SDT nullified the FKF elections but ruled that the current regime remain in office until elections are held.  It was a blanket call with no set timeline which threatens to open a pandora box. It thus can be interpreted, FKF is, by their orders rightfully conducting elections.

The determination of the question of the Tribunal’s “right to extend their (FKF) term” will also shape arguments by some clubs based on the tenure of the current FKF office bearers. They want a number of declarations by the SDT, including nullifying the Special General Meeting (SGM) of January 28 that significantly gave way to the repeat elections process. 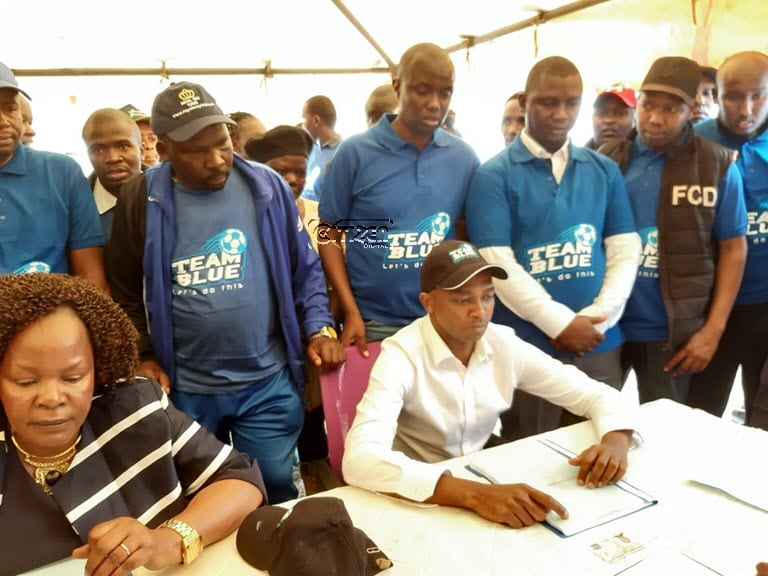 “A declaration that the Special General Meeting of 28th January 2020 was not convened and constituted in accordance with the FKF Constitution 2012(or even the proposed FKF Constitution 2017). A declaration that the resolutions passed at the said meeting are null and void and of no legal effect,” are part of the prayers sought by clubs opposed to the ongoing electoral process.

The clubs also want a declaration by the SDT that the proposed FKF 2020 Elections are “illegal” for non-compliance with mandatory provisions of the Sports Act 2013 and the directives of the Sports Registrar as to registration of County Associations and participating Clubs.

Interestingly, the Tribunal had given orders that by 2015 December, the federation should have conformed with the 2013 Sports Act, which has not been achieved yet. This means, ruling against the parties challenging the validity of the federation on grounds of the Sports Act non-conformity, will be another self contradiction.

“FKF make arrangements to comply with the Tribunal’s order to register under the Sports Act as required by law and such compliance must be undertaken on or before December 4, 2015,” read part of the ruling then.

Another area of contention is the interpretation of what exactly public participation means/constitutes, as far as the electoral process is concerned.

While FKF insists they duly conducted “public participation” after the annulled 2019 elections, there is still a feeling among the  parties opposed to the process that there was no ideal public participation, hence opening up fodder for debate.

Another area of interest is how the SDT will treat the question of Appeals Committee as constituted in the current electoral code.

Part of the prayers before the SDT is that it declares that the Appeals process proposed in the electoral code does not meet the threshold of independence and impartiality contemplated in Article 47 and 81 of the Constitution of Kenya 2010, FIFA Statutes, the Statutes of FKF and FIFA Standard Electoral Code, or indeed, the impugned FKF Electoral Code itself.

That means, questioning the FKF’s mandate to appoint the committee, which could amount to poking holes on the federation’s independence.

Meanwhile, the Electoral Board is running against time, away from the battles at the SDT, to strictly follow the tight schedule set to deliver elections before the Fifa’s deadline.

The process of the County Representatives nomination is already done, by the Kentice Tikolo led board but the elephant in the room is whether the elections will proceed or not. Failure to meet the deadline will definitely open up a can of worms leaving Kenya’s football in limbo. Meanwhile, the country finds itself in catch-22 situation and perhaps Solomonic wisdom will be needed moreso by Ohaga to unlock the conundrum.