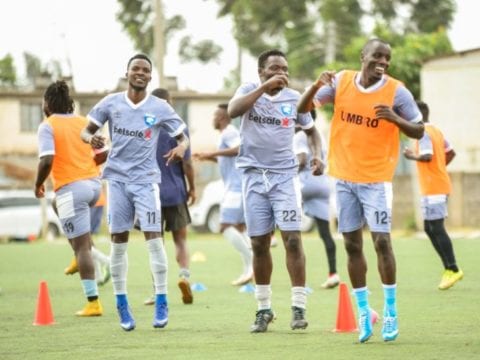 The new FKF Premier League season is scheduled to kick off on Saturday but several clubs are in financial turmoil and the league itself is without a title sponsor.

Kenya’s most successful clubs Gor Mahia FC and AFC Leopards are no exception after struggling financially last season with players going for months without salaries.

At Gor though, the situation appears to be getting better with the former champions now able to recruit new squad members after clearing debts owed to former players.

In the Leopards camp, the club has elected to go for players in the youth team to bolster the playing unit as they race against time to clear salary arrears of their former head coach Casa Mbungo and former players Soter Kayumba and goalkeeper Eric Bakame Ndayishimiye.

The former AFC Leopards central defender has revealed that Mathare will carry last season’s financial woes into the new season since they have no sponsor just like many clubs.

“Financially I think the whole federation is financially sick. For example Football Kenya Federation lost their main sponsors last year and as you are aware just yesterday the national team Harambee Stars lost their sponsors.

Personally I can say that the league is crumbling and the clubs too. At Mathare we have been getting sponsors and losing them for the last five years.

I don’t think this new season will be different from the struggles we have had last season unless something special happens,” Ochieng said.

Sofapaka president Elly Kalekwa has on his part said that last season’s financial struggles will however change this season as they have agreed with their betting firm sponsor that players will receive their pay in time.

“We are okay because we have corrected last season’s faults. After holding talks with our sponsors I can say we have planned on how players will be paid on time unlike last season.

Corona really affected us last season but this season I think we are good to go,” Kalekwa said.

And Kakamega Homeboyz patron Cleophas Toto Shimanyula is ready to keep supporting his boys in all means despite being neglected by their main sponsors who are the Kakamega County Government.

“We have a sponsor (Kakamega County Government) but we have never seen their money for the last one year.

However we have another sponsor, a betting company who will help me as I dig deep into the pockets to steady the sheep financially,” Shimanyula said.

Champions Tusker FC will launch their title defence with an away match against AFC Leopards at the Nyayo National Stadium on September 25.