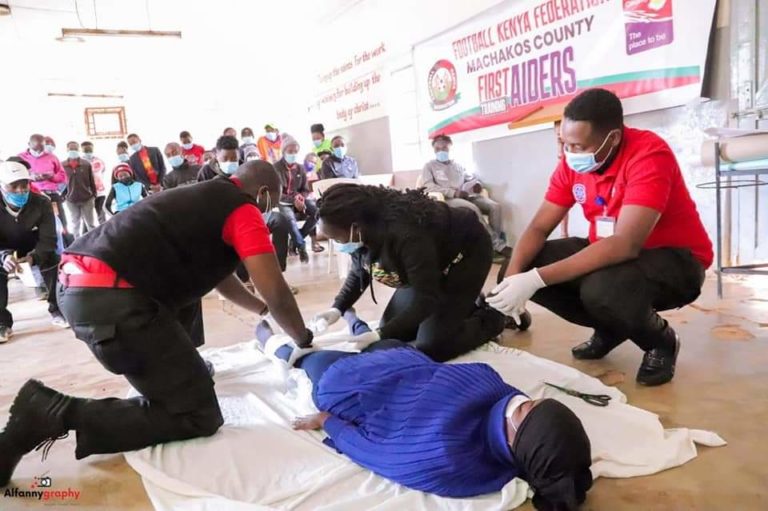 The programme was launched Thursday at Kangundo Level Four Hospital where more than 40 footballers drawn from 15 football clubs in Kangundo and Matungulu sub-counties were the first beneficiaries on basic first aid skills.

“We’ve very few professional first aiders in our grassroots leagues in Kenya and that’s why FKF has moved in to partner with respective departments to help in this area.

“Our footballers suffer a lot when they’re injured before they finally get to hospital due to lack of first aiders. It’s dangerous when that happens because the concerned players can even lose their lives when they lack the first and early stages of treatment,” he said.

On his part, Machakos County executive committee member in Health department Dr. Ancient Kituku said the programme was the first step in entrenching sports medicine, an area which he said had been neglected.

“We know what happened to Eriksen (Christian) during the Euros, he collapsed during the match and the doctors later said had it not for the team’s captain, who intervened quickly, the player could have lost his life. We will also award the beneficiaries certificates from Red Cross.”

He added that the programme will also be extended to include Bodaboda riders who are usually the first responders at accident scenes during the grass roots football tourneys.

“We want to give our players basic skills in first aiding to ensure that before the injured players receive medication we don’t just watch them suffer. We will roll out the programme to all the eight sub counties and I encourage other counties to follow suit because I’ve realised the sports medicine area has not been given attention in our sports,” said Dr. Kituku.