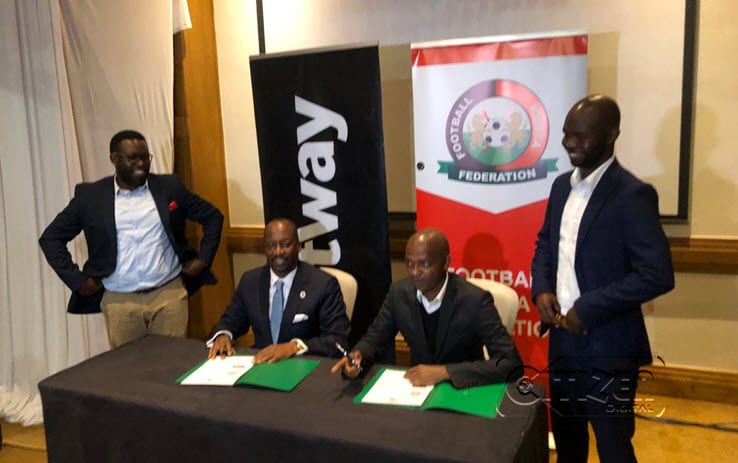 Football Kenya Federation has unveiled a three-year sponsorship deal worth Sh45 million with a gaming firm.

The funds will be used in the sponsoring the FKF Cup which kicks off this weekend.

Speaking at the event on Tuesday, FKF chief Nick Mwendwa challenged more gaming firms to join the fray and partner with football clubs.

Mwendwa also challenged Kenyan football clubs to up their game by aggressively seeking partnerships and ways of becoming self sufficient.

“I ‘d like to encourage other companies not to shy away from sponsorship deals and the government to create an environment that makes it easy for companies to commit their funds into such initiatives,”said Mwendawa.

“It is our strong belief that this partnership will not only accord our players the much needed opportunity to showcase their talents but also underpin the commercial aspect of the game, key in the growth of our local football.”

Mwendwa also identified the challenges facing clubs which are sponsored by sugar milling companies, a majority of which are on their death beds.

“In Kenya we’re having a challenge especially with the sugar belt teams because of the failing sugar factories. I’d like to ask the government to look into it because without these companies supporting the clubs, inevitably they will go down.

“Every club requires financial support so I’m asking other sponsors and in those regions to see what they can do because those clubs; Sony, Chemelil and Nzoia – are facing very tough times.”

The Cup competition will bring together 48 teams drawn from across the FKF leagues as well as non-league sides for a knockout competition.

The winner of the competition will represent Kenya in the CAF Confederations Cup in the 2020/21 season.