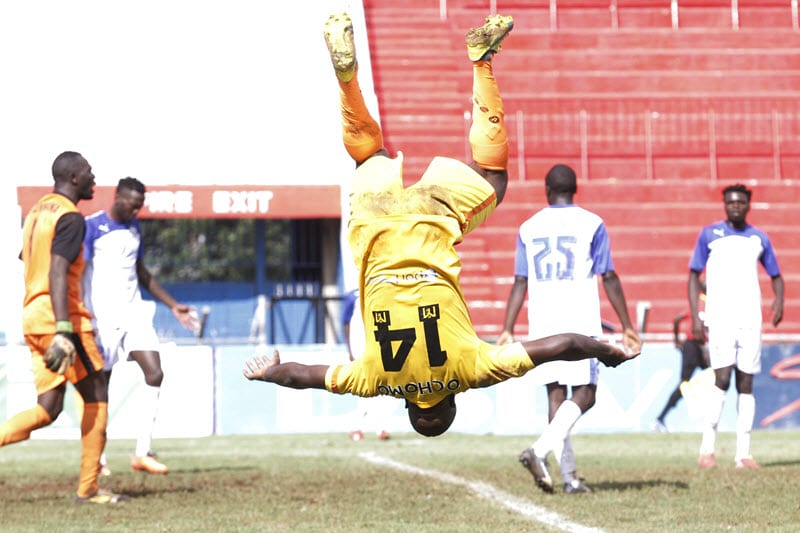 There is hardly any Kenyan Premier League (KPL) player that stoked controversy as much as Muhoroni Youth’s forward Wycliffe Ochomo did over the 2016 campaign.

In what was a season of mixed feelings for Muhoroni – winning the KPL Top 8 crown but falling off the qualification bracket to defend next year – and one which the Awendo-based club more than once stole the headlines for the wrong reasons, Ochomo seemed comfortable sitting at the center of every embroil.

But he matched his antics with match-winning performances and despite having his campaign cut short through suspension with five rounds left before its close, Ochomo managed an impressive 12 league goals, second only to Ulinzi Stars forward and Golden Boot winner John Makwatta who managed three more.

The 26-year-old had already managed five goals after only eight rounds with his winning strike against Bandari on April 10 overshadowed by a heated alterction between Muhoroni and the visiting Bandari players.

A second half foul from Duncan Otewa on winger Samwel Ndungu had elicited furious reactions from the home side and as tempers flaired, Ochomo swung in to express his disgust and where he was later accused by the then Bandari Coach Twahir Muhiddin for venting ‘unprintable’ abuses.

“He was left off lightly. But as an experienced player he ought to carry himself with dignity. It was a good game of football. We were stable in the first half but Muhoroni came back a strong side and they deserved to win, though they should uphold sportsmanship,” Muhiddin said then.

Later in September, Muhoroni players staged a long standoff in protest of an alleged mistreatment from the club’s management as they famously fled to Nairobi to seek aid while accusing club chairman, Moses Adagala, of hiring goons to attack them overnight.

Then, it was claimed Ochomo’s house had been broken into together with that of Bebeto Lwamba and Yusuf Mohammed.

It signaled the end of Ochomo’s stay at the club as he vowed never to turn out for the Awendo-based side before his suspension for ‘breach of contract’ just weeks later.

Five other players – Francis Ocholla, Bebeto Lwamba, Victor Omune, Andrew Sekayombya, Kevin Otieno and Calvin Omanga – followed him through the door with the club citing gross misconduct for their suspensions.

“Yes, we have given them indefinite suspensions for indiscipline, they have been affecting the team negatively and we felt action should be taken against them. They have been inciting other players against the management and acting in a bad way, and their influence has affected the team,” Adagala explained.

Their departures considersably slowed down Muhoroni’s league momentum as they slid down to end their season on tenth.

Minutes after picking up his first runners up Golden Boot award, Ochomo had no kind words for his former side as he squarely blamed them frustrating his dreams of playing abroad.

“They really mistreated me this season. I missed out on two trials because they failed to facilitate the requirements needed by the interested teams abroad. Twice I was left stranded at the airport but all those are now missed opportunities.

“I have spoken to several clubs in the KPL including my home team Bandari but I’ll need more time to decide on my next month which I think will be a stepping stone  towards my dream which is to play abroad,” he told Citizen Digital at the KPL Footballer of the Year Awards (FOYA) held earlier in the month.