Folau set to have contract terminated after controversial posts 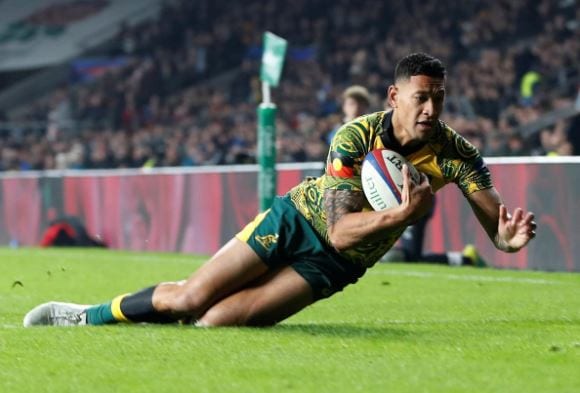 Rugby Australia (RA) is set to terminate Israel Folau’s contract after it issued the country’s best-known and best-paid player a code of conduct breach notice on Monday over a social media post saying gay people would go to “hell” if they did not “repent”.

RA had previously said it would terminate the contract of the 30-year-old fullback, a fundamentalist Christian, if he could not offer a good reason for the post.

“The Rugby Australia Integrity Unit deemed that Folau had committed a high-level breach of the Professional Players’ Code of Conduct warranting termination of his employment contract,” RA said in a statement on its website.

“Folau has 48 hours to accept the sanction or have the matter referred to a Code of Conduct hearing.”

Folau has virtually been ever-present in the Wallabies number 15 shirt since switching to rugby union from Australian Rules in 2013, and his sacking would be a massive blow to coach Michael Cheika at this year’s Rugby World Cup in Japan.

The player posted similar comments last year but escaped sanction and signed a new deal with RA through 2022 in February.

“Following the events of last year, Israel was warned formally and repeatedly about the expectations of him as player for the Wallabies and NSW Waratahs with regards to social media use and he has failed to meet those obligations,” RA Chief Executive Raelene Castle said.

“It was made clear to him that any social media posts or commentary that is in any way disrespectful to people because of their sexuality will result in disciplinary action.”

If Folau requested a hearing the case would be dealt with by an independent three-member tribunal tasked with determining if the player had breached the code of conduct and decide on his punishment if found guilty, RA said.

Wallabies coach Cheika said earlier on Monday that he would not be able to pick Folau again due to the “disrespectful” social media posts.

“We had a discussion after the last time and made it pretty clear about his right to believe and our support in that, if that’s what he wants, to be part of the team,” Cheika added.

“But getting it out in that disrespectful manner publicly is not what our team is about.

“When you play in the gold jersey we represent everyone in Australia, everyone. Everyone that is out there supporting us, we don’t pick and choose.”

Folau said on Sunday he would stand by his comments, even if that meant giving up rugby.

“In saying that, obviously I love playing footy and if it goes down that path I’ll definitely miss it,” he told the Sydney Morning Herald after attending a service at his local church.