For Equity’s coach Baraza, focus is on securing NSL promotion 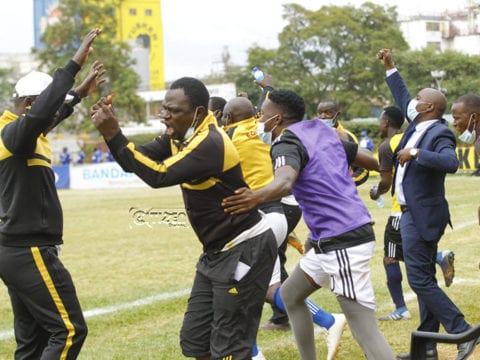 Equity FC head coach John Baraza has reiterated his team’s commitment to finishing in the top two in the FKF Division One Zone B league, as they eye promotion to the National Super League.

Baraza whose team had a phenomenal run in the FKF Cup reaching the semis for the very time in their history says their focus is now entirely on finishing the campaign strongly so as to stand a chance of promotion.

“Our ambitions are still in line because at the start of the season our target was to get promoted to the National Super League and will keep on fighting for that until the end,” said Baraza.

Equity  had a remarkable run in the FKF Cup reaching the semis where they lost out to AFC Leopards 6-5 in postmatch penalties =after a thrilling goalless draw and this impressive run caught the eye of pundits and big clubs.

The former Harambee Stars player notes that their enviable performance in the Cup has changed the mood in the camp and he hopes that momentum will propel the team to the top of the league standings.

“We were so proud of our performances in the cup and it’s something I know will motivate the boys going forward. We showed courage and determination as a team and we didn’t fear anyone despite playing against top teams in the top tier of the FKF Premier League. We learned a lot along the way and it’s upon us now to work hard and put in a shift in our final leg to ensure we are among the top teams in our zone,” Baraza explained.

While praising his team’s resolve to do well, Baraza says it’s a major boost having steady financial support from the management, a situation most clubs in the top tier are currently grappling with.

“In Kenyan football you must have a stable source of income otherwise you will struggle to even do well. I thank our sponsors Equity for being there for the boys even during the pandemic. You can see most teams are struggling to even pay player salaries and that sucks the morale out of the players because they aren’t fully focused on playing but thinking of how to cater for their bills and other expenses.”

The former Sofapaka tactician received endless plaudits for his transformation of Equity FC and  this didn’t go unnoticed by the top dogs in the premier league although he says he is fully focused on Equity FC.

“Everything is always up for a discussion but I’m currently focused on Equity FC because we have a project we are working on. So, for now I’m not considering any other offers but we will see what happens in future.”

Equity lie third in the FKF Division One Zone A league with 26 points from 12 games played, one point behind second placed SS Assad and 10 points behind runaway leaders Naivas FC having played three matches less.

Only one team gains automatic qualification to the NSL from each zone, while second placed teams in the two zones face off in a play off to determine who gets the final promotion ticket.