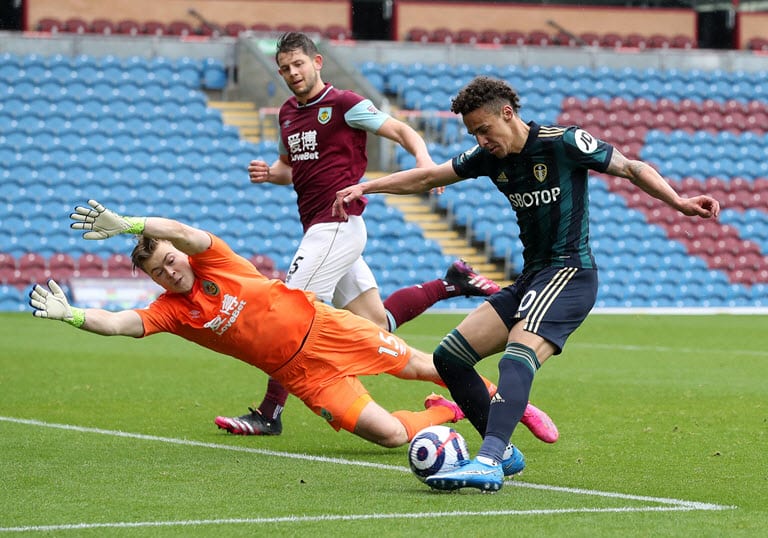 Leeds United continued a strong finish to their first season back in the Premier League with an impressive 4-0 victory over Burnley at Turf Moor.

Mateusz Klich curled in from the edge of the penalty area shortly before half-time and Jack Harrison’s flicked finish from Ezgjan Alioski’s strike after 60 minutes all but sealed the three points.

Substitute Rodrigo scored twice in three second-half minutes to complete a fine away win, producing a delightful chip over Bailey Peacock-Farrell for his first before rounding the Clarets keeper for Leeds’ fourth.

With their Premier League safety confirmed by victory over Fulham on Monday, Burnley made a confident start, but Leeds’ Patrick Bamford went closest in the opening 10 minutes as he forced Peacock-Farrell – in for the absent Nick Pope – into action.

Charlie Taylor produced an excellent sliding block to deny Raphinha as the visitors gained a foothold, and the Brazilian forward was unable to execute an instinctive over-head attempt before Klich’s opener.

Matej Vydra was thwarted by the outstretched leg of Illan Meslier as Burnley pushed for an equaliser, before a dominant end to the contest ensured Marcelo Bielsa’s side remain on course for a top-half finish.

Leeds are ending their first Premier League campaign in 16 years in great form, having lost only once in their past nine games.

While they began under pressure on Saturday, Bielsa’s side showed their class in a dominant second-half display, after Klich had ended Burnley’s resistance before the interval with an unopposed run and fine finish into the bottom corner.

With England midfielder Kalvin Phillips back to handle the physical test posed by the hosts and the flare of Raphinha reinstated in attack, Leeds were able to cut loose in the closing stages despite a quiet afternoon for top scorer Bamford.

Rodrigo replaced Bamford – who was unable to further his case for an England call-up – before the hour mark and it proved an inspired move as the tiring Clarets were unable to live with the sharp movements of the £26m summer signing from Valencia.

Harrison, 24, was arguably the standout performer, however, as he claimed a goal as well as two assists for Rodrigo – leaving only Manchester United’s Bruno Fernandes with more goal involvements from midfield in the Premier League this season.