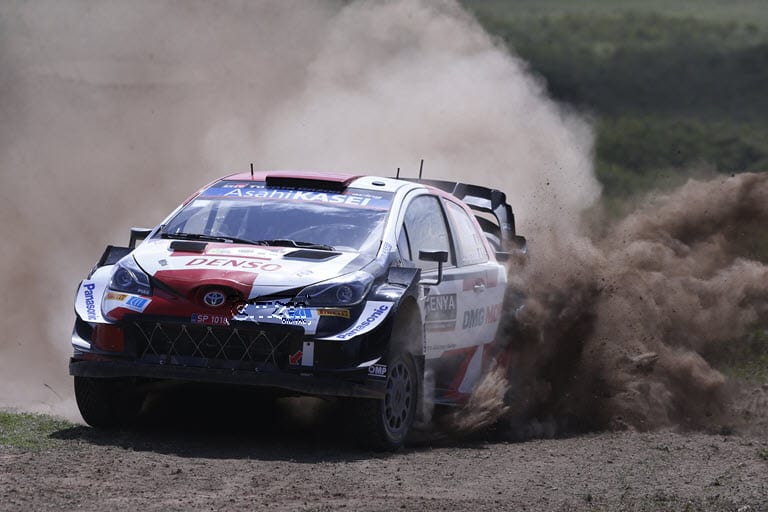 Sebatian Ogier is the WRC Safari Rally winner after coming back from seventh to claim the coveted Safari trophy on its first edition since making a return to the FIA World Rally Championship after a 19-year hiatus.

The Frenchman braved it all on a tough terrain, after four days of rigorous racing to come out top of the pile.

Ogier was resigned to second place by the start of the 15/18 stage, but a sudden upturn of events led to the unforeseen retiring of longtime leader Thierry Neuville and this handed the advantage to the Frenchman who by then was trailing teammate Takamoto Katsuta by 0.8sec.

He then went on the attack in the 16th (Malewa) stage, beating Katsuta by a whooping 8secs to tie at the top.

He eventually took the lead at the penultimate stage (Loldia2) after getting the better of Takamoto Katsuta by a 8.3sec, clocking 7.35.0 in winning the stage.

Going into the final power stage at the Hells Gate, it was a matter of maintaining momentum and the Frenchman was level-headed enough to keep his cool and win his fourth round in the last six in the WRC.

He couldn’t hide his jubilation at winning the WRC Safari Rally by coming from behind.

“Its great, I feel so proud. I always have the attitude of giving my best. It wasn’t the best start on Friday because we lost 2 minutes with the suspension issues, but we had to believe things were possible. This morning we were fighting for the podium, but it turned out to be a fight for victory when Neuville retired,” said Ogier.

Ogier was grateful to the brutal nature of the Safari, as it was because of the many challenges that he was handed a lifeline.

“Rally Kenya didn’t disappoint, it was way challenging for so all of us; many things happened and it’s good to come out as a winner. I carry with me many memories of this place, unique experience from the other places, beautiful support from the people and wonderful scenery. I will definitely come back to visit the place.”

Second placed Takamoto Katsuta was gracious in losing and expressed his joy at making his first podium.

“To be honest I didn’t expect I could be on the podium in this rally, because I thought that this rally will be very difficult, a survival rally but I’m here and very happy thanks to my team, they fixed the car all the time and it run perfectly. I made a lot of mistakes by myself, stage one I stalled engine, the second one I stalled engine again but mistakes have been happening to everyone but I have to improve on these small things.”

The Japanese was another driver who was overly impressed by the number of rally fans who turned out on the roadside as well as the stages to cheer them on.

“I can’t wait to be back here next year. I’m so impressed by rally fans in Kenya. There are so many people on the road section and also at the stages. I can’t wait to come back.”

Hyundai’s Estonian driver Ott Tanak finished third after losing ground in yesterday’s final stage where a faulty windscreen heater forced him to stop and wipe it clean by his hands. Hyundai team principal Andrea Adamo moaned the challenges of his team and conceded that they will need to review their suspensions after the team lost three consecutive leg leads due to suspension problems, this time Thierry Neuville suffering the fate.

“If I knew I would never have let it happen. It’s unfortunate but we will look at it. Yeah, it seems we have an issue with the suspensions its something we will review.”

M-Sport Ford teammates Adrien Fourmaux and Gus Greensmith claimed fourth and fifth in their Fiestas as their risk-free strategy paid dividends with Frenchman Fourmaux clinching his first top-level stage win on Sunday morning. They were split by 9.9sec after Fourmaux demoted his colleague two stages from the end.

WRC3 winner Onkar Rai was seventh, ahead of Karan Patel and Carl Tundo as Elfyn Evans took the last slot in the top ten.

The second half of the championship returns to Europe with Rally Estonia slated for 15 – 18 July.