From humble beginnings: The rise and rise of Eliud Kipchoge

The greatest marathoner of the modern era Eliud Kipchoge has proved to the world that it’s only human beings who create their own limits and everything is possible when tried.

This milestone is the defining moment of Kipchoge’s illustrious career and for starters, the 34-year-old Kenyan has raced 13 marathons winning a whooping 12 times since he switched to road running in 2012.

Kipchoge’s success has been immensely contributed by his trainer and next door neighbour Patrick Sang-a former Olympic medalist in steeplechase – since the duo met in 2001 while Kipchoge was just 16.

Like many other long-distance runners, the Olympic champion started his career in track as a teenager where he specialized in 5,000m before he gradually graduated to marathon.

The Journey of the G.O.A.T

The son of a single mother started to shine about two years after he completed his secondary studies in 1999 with his peers revealing that Kipchoge struggled to make an impact in athletics while at High School.

In 2002, at the age of 16, the world marathon record holder won at the Kenyan trials for the 2002 IAAF World Cross Country Championships junior race.

At the World Cross Country Championships held in Dublin, Scotland, Kipchoge finished fifth in the individual race and was part of the Kenyan junior team that won gold.

In 2003, Kipchoge kick started his career with a world junior record in 5,000m at the Bislett Games, running a time of 12:52.61 minutes. This stood as the world and African junior record until 2012, when it was improved to 12:47.53 minutes by Hagos Gebrhiwet of Ethiopia.

The same year he won a gold medal at the 5,000m final at the 2003 World Championships, outsprinting both future world record holder Kenenisa Bekele and runner-up Hicham El Guerrouj (the world record holder in the 1500 metres and mile) by four hundredths of a second (12:52.79 vs. 12:52.83).

During the 2008 Olympics held in Beijing, China, Kipchoge won a silver medal in the 5,000m event with a time of 13:02.80; although better than the previous Olympic record of 13:05.59, it was not enough to match Bekele’s pace, who won gold medal in the race.

With this win, Kipchoge became the second Kenyan male after Sammy Wanjiru in Beijing 2008 to win an Olympic marathon gold medal.

In 2012 the father of three moved to road events where he would later break the last human barrier an attempt which he had likened to stepping on the moon.

In October 6 of the same year, Kipchoge ran in the IAAF World Half Marathon Championships in Kavarba Bulgaria where he placed sixth 1:01:52. 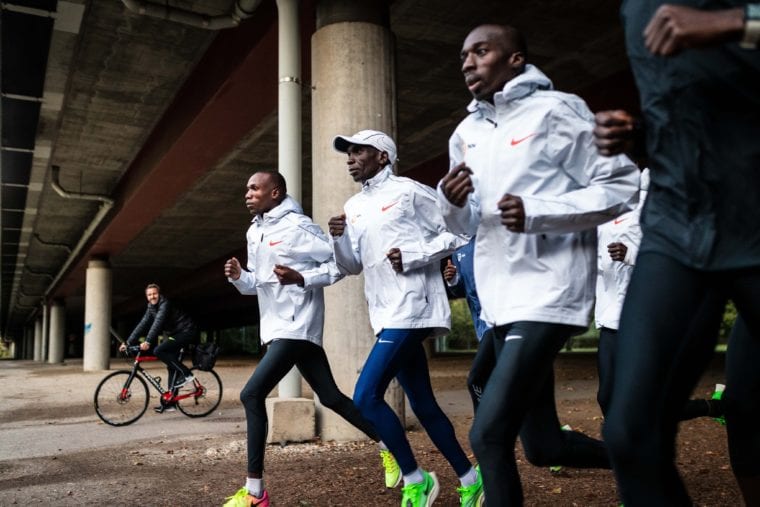 He opened the following season with a win at the Barcelona Half Marathon in a time of one hour four seconds before making his marathon debut in April 2013.

Kipchoge demonstrated a smooth transition to the longer distance by taking the Hamburg Marathon title with a run of 2:05:30 hours—beating the field by over two minutes and setting a new course record.

In the same year Kipchoge raced in the famous Berlin Marathon finishing second in 2:04:05 behind his compatriot Wilson Kipsang who set a new marathon world record with 2:03:23 smashing Patrick Makau’s record (2:03:38) which had stood since 2011.

Since then Kipsang is the only person to ever stand between Kipchoge’s successes in marathons.

In his second attempt in Berlin Marathon in 2015 Kipchoge won with then-personal-best – a time of 2:04:00 despite his shoes malfunctioning, causing his insoles to flap out of both shoes from 10 km onward; rather than risk time lost from an adjustment, he finished the race with bloodied, blistered feet.

In April 2016, Kipchoge won the London Marathon for the second consecutive year in a time of 2:03:05 with his performance setting a course record in London where he became the second-fastest marathon time in history, missing Dennis Kimetto’s world record by 8 seconds.

In the same year, Kipchoge became the second Kenyan male after Sammy Wanjiru in Beijing 2008 to win an Olympic marathon gold medal after timing 2:08:44 in the event held in Brazil.

His second Berlin Marathon triumph came in September 2017 timing 2:03:32 ahead of Guye Adola who ran his first marathon that year.

In September 16 2018, Kipchoge joined world record breakers after he won the Berlin Marathon in a time of 2:01:39.

Kipchoge broke the previous world record set by fellow countryman Dennis Kimetto at the Berlin Marathon in 2014 by 1 minute and 18 seconds.

Following his performances in the 2018 season, Kipchoge received various accolades and recognitions.

He was named IAAF World Athlete of the Year Sportsman of the Year and Kenyan Sports Personality of the Year Awards in Mombasa, beating fellow contenders for the coveted trophy, athlete Hellen Obiri, boxer Fatuma Zarika and rugby star Janet Okelo.

Kipchoge won the 2019 London Marathon in a time of 2:02:37, the second fastest marathon of all time, behind his 2018 Berlin Marathon win. His fourth win in London marks a new course record, beating his own 2016 London Marathon record by 28 seconds.

After breaking the World record, Kipchoge once again returned to London marathon in April 2019 for another routine win bagging his fourth title in the English capital.

Many expected either Kipchoge would then return to Berlin to defend his title or seek a World title in marathon at the World Championships that were also scheduled for October as Berlin.

Kipchoge however had other plans as he announced he will be racing in INEOS 1:59 Challenge that was to be held between October and November.

While in his first attempt to breaking sub-two hour in marathon held in Monza, Italy in 2017, Kipchoge missed the mark by just 26 seconds and Saturday race provided the perfect opportunity for him to achieve his target he said first came to his mind in 2016.

In his first attempt, the event wasn’t publicised as such unlike today’s event that became the talking points in both local and international media as Kipchoge enjoyed support from his compatriots led by President Uhuru Kenyatta who called him in Vienna as Deputy President William Ruto led governments delegation in Austria.

By breaking the barrier, Kipchoge has not only achieved his biggest dream but has also justified to the entire generation that ‘No Human is Limited’- as his mantra goes.